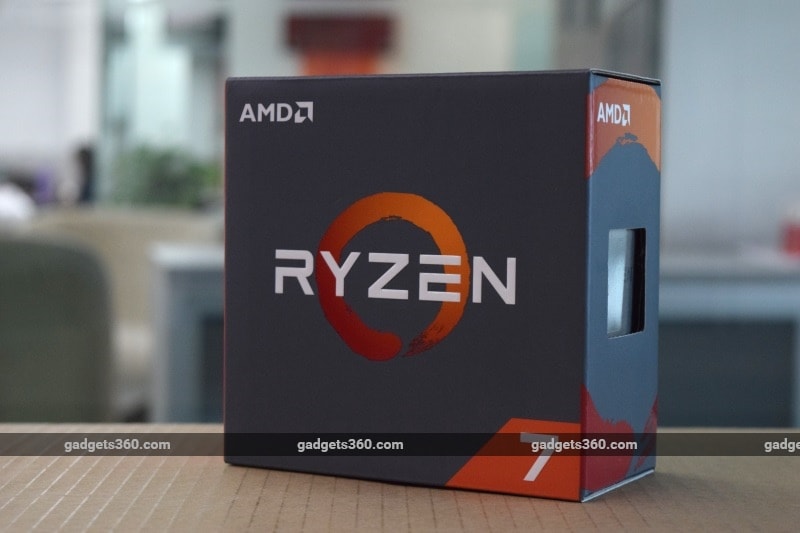 AMD’s Ryzen CPUs, the first products to use its brand new Zen architecture, have finally been launched after years of mounting anticipation. The success of these products is critical to AMD, which hasn’t had a competitive high-performance CPU to offer in nearly a decade. AMD is the only company - other than Intel of course - capable of designing and producing x86 computer processors, partly because of the sheer scope and scale of the engineering involved, and partly because of its complicated history of cross-licensing the required technology with Intel.

Gadgets 360 was present at an international gathering of the tech media in San Francisco last week to hear all about the Ryzen architecture and platform directly from AMD’s top management. Here’s a deep dive into all the information that was disclosed, plus everything you should know about the new motherboards, chipsets and coolers before you rush to the market.

Also check out our detailed review of the Ryzen 7 1800X along with the MSI X370 Xpower Gaming Titanium motherboard, including test scores and usage notes.

The Zen architecture is brand new, not an iterative improvement upon the previous Bulldozer and Excavator designs which have underpinned AMD’s CPUs and APUs for the past decade or so. Zen is a single design which can scale across chips for everything from thin fanless notebooks to high-powered workstations and servers. AMD is particularly proud of this, saying that performance scales in an almost perfectly linear fashion.

While products for different segments will roll out through the year, AMD is kicking it off with three high-performance desktop CPUs, named Ryzen 7 1800X, Ryzen 7 1700X and Ryzen 7 1700. There will eventually be Ryzen 5 and Ryzen 3 CPU lines as well, mirroring Intel’s Core i7, i5 and i3 positioning.

All three Ryzen 7 CPUs have eight physical cores and can run 16 threads, using a technique called Simultaneous Multi-Threading (SMT), much the same as Intel’s Hyper-Threading. AMD thinks that developers, especially game developers, are really starting to embrace the power of multiple cores thanks to Vulkan, DirectX 12, and the fact that they target development for game consoles which now have multi-core CPUs.

The Ryzen 7 1800X is clocked at 3.6GHz and can go up to 4.0GHz on all cores when needed. The Ryzen 7 1700X runs between 3.4 and 3.8GHz, while the Ryzen 7 1700 can scale from 3.0 to 3.7GHz. However, one of Ryzen’s best features is that speed isn’t hard-capped at the upper ends of those ranges.The CPU can decide for itself that there is enough headroom within its TDP envelope to push the clock speed even further on demand. AMD calls this XFR, or eXtended Frequency Range, and says it only makes sense to take advantage of the beefy air coolers or liquid solutions that enthusiasts often employ. XFR is completely transparent to users and will be disabled if you do any manual overclocking – speaking of which, every Ryzen CPU is multiplier unlocked.

Ryzen CPU models with an X suffix both have 95W rated TDPs and a much wider XFR range. While the R7 1700 still does support XFR, its lower 65W TDP doesn’t allow for much headroom. “X” models don’t ship with a cooler – AMD believes that enthusiasts will want liquid cooling or something exotic, or will be choosing their cooling solution based on aesthetics.  The Ryzen 7 1700 will sell with a quiet cooler called the Wraith Spire, which as a neat RGB LED ring in keeping with today’s trends.

AMD has also designed a beefier Wraith Max cooler which will work with the 95W models (and also has the RGB LED ring), but there are no current plans to sell it in the retail market. It exists so that OEMs and system integrators have a reference, and will probably ship with pre-built systems.

There’s also plenty going on at the chip architecture level. Zen is an all-new design; created from scratch. AMD claims a 52 percent increase in instructions per clock compared to the previous Excavator architecture on which recent AMD CPUs have been based, and a 270 percent improvement in performance per Watt. That’s a result of multiple factors: the architecture itself, the 14nm finFET manufacturing process, the sensors that allow power to be regulated, and overall design improvements that reduce overheads.

Ryzen CPUs have a feature called Precision Boost which refers to their ability to clock up and down in increments of 25MHz rather than the usual 100MHz. This means that control over power and performance is much more fine-grained, and switching between states is quicker. AMD describes Ryzen as the first “smart” processor because it can inspect workloads and adjust itself in real-time to respond to them.

The controversial "module" design of previous architectures, which shared a single floating-point unit between two cores and caused bottlenecks in some situations, has been discarded. Instead, Ryzen CPUs are divided into "complexes" of four cores, each with its own L2 cache and a "slice" of a shared 8MB L3 cache pool. All cores can access each other’s cache slices at high speed. Each core’s power consumption can be tweaked independently, and the L3 cache voltage can also be adjusted depending on feedback from the embedded sensors. Octa-core Ryzen 7 CPUs feature two such complexes, which communicate over a high-speed interconnect called Infinity Fabric. Other Zen CPUs might have different numbers of complexes, with individual cores within them enabled or disabled.

Efficiency is improved by making sure that a CPU can predict which bits of data and which instructions need to be available for processing, and in what order. AMD says it has employed artificial intelligence learning algorithms to pre-emptively fills lower-level caches with what’s going to be needed, optimises multi-threading to fill processing capacity, and greatly reduces misfires and wasted cycles. These details apply to the Zen architecture overall, so it will be interesting to see how things play out for AMD across the spectrum from ultraportable laptops to datacentre servers.

The Socket AM4 platform

With this new generation of CPU comes a new platform, called AM4, and new controllers (also known as chipsets). This generation’s top-of-the-line platform is called X370, and below it are the B350 and A320  - names that cheekily suggest they’re one step better than Intel’s current x2xx platforms.

Because of the amount of time that has passed since AMD’s AM3 platform was modern, AM4’s features seem like a massive jump. There’s PCIe 3.0, USB 3.1 Gen 2 with support for the Type-C connector, NVMe, and more.

There are two possibly confusing things about AM4 to note. First, it is designed to work not only with Ryzen CPUs, but also APUs, including the ‘Bristol Ridge’ range released last year. For this reason, a motherboard might have physical video outputs, but you can’t use them with Ryzen CPUs which lack integrated graphics.

Secondly, Ryzen CPUs feature a limited amount of integrated IO and can function without a chipset – i.e. as Systems on a Chip (SoCs). There will soon be motherboards labelled X300, B300 and A300, which will be smaller and lower cost, and will probably show up in OEM systems. These pseudo-chipsets only handle hardware security and booting, leaving the rest to the Ryzen CPU. PCs that use them will have somewhat limited features, such as a lack of USB 3.1 Gen 2, even with the same CPUs. However, the four PCIe lanes used to link the CPU to a traditional chipset become free for other uses, such as onboard Wi-Fi and storage.

While new chipsets should accompany new processors over the next few years, AMD doesn’t expect its physical socket to change till around 2020 when PCIe 4.0 and DDR5 RAM should begin to appear, so expect a wide range of compatibility questions.

Only the X370 can support multiple Nvidia graphics cards, though that’s now a high-end niche feature that no one will really miss. AMD CrossFire works on the X370 and B350. Interestingly, the low-end A320 loses overclocking support even though all Ryzen CPUs are unlocked, for the sole reason that low-cost motherboards often can’t handle high voltages well enough, and the experience is generally poor. Mainstream users should find that the B350 offers the best balance of cost and features.

While Intel focuses its strengths on the ultra-portable notebook market and 2-in-1s, AMD has very deliberately chosen to start the Ryzen rollout with high-end desktop CPUs. According to the company, this segment is growing, and gamers and content creators are a huge overlapping market. The Ryzen rollout will progress rapidly through 2017, and Ryzen 7 allows it to get its CPUs right before mixing in the Vega graphics architecture with APUs for desktops and laptops later this year.

AMD knows very well that its CPUs have a historical reputation of running hot, and that Ryzen marketing will have to take care of that, especially in India. The Wraith series coolers are designed to combat this very perception. Also for India, AMD wants to target content creators in the film, visual effects and 3D modelling industries and so it will be pushing Ryzen CPUs on the basis of their multiple cores and how cool and quiet they run.

All three Ryzen 7 CPUs as well as a raft of motherboards from Asus, Gigabyte and MSI are already available in India. If you’re considering an upgrade, do check out our full review of the Ryzen 7 1800X.

Disclosure: AMD paid for the correnspondent's flights and hotel for the Ryzen Tech Day event in San Francisco.