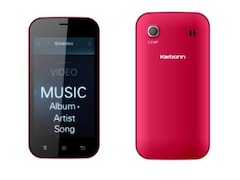 As far as the cameras are concerned, the Karbonn A91 on the rear packs 3.2-megapixel camera. It sports an Unspecified camera on the front for selfies.

Karbonn A91 is based on Android 4.2 and packs 512MB of inbuilt storage that can be expanded via microSD card (up to 32GB). The Karbonn A91 is a dual-SIM (GSM and GSM) mobile that accepts Regular and Regular cards.

Connectivity options on the Karbonn A91 include Wi-Fi and FM radio. Sensors on the phone include proximity sensor.

Karbonn A91 Price in India

Karbonn A91 User Review and Ratings