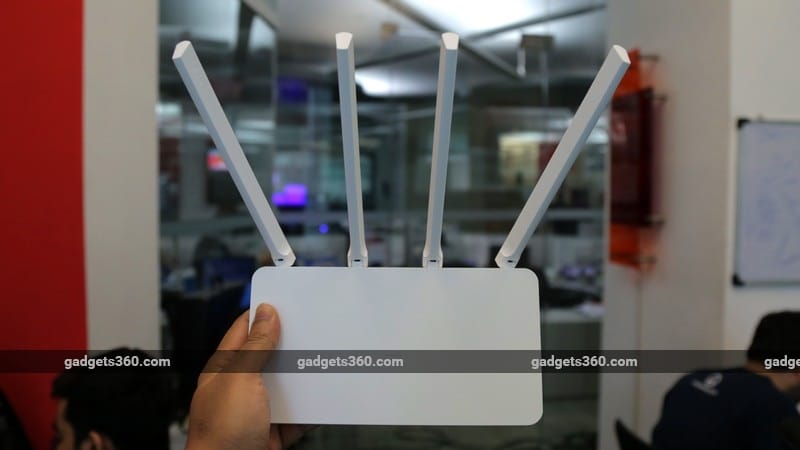 Xiaomi has earned its reputation by offering good products at bargain prices. The company has really made a mark on the Indian smartphone market, but in China, Xiaomi is known for a much wider variety of electronic products. Slowly, more and more of these are making their way to India.

The company launched its first router in India, the Mi Router 3C, a couple of weeks ago. It boasts of four antennas for better range, ample RAM for handling plenty of devices, and a sleek monolithic design. At just Rs. 1,199, is it the best entry-level Wi-Fi router? Let's find out.

Built from ABS plastic, the Mi Router 3C is fairly light at just 241 grams and looks quite nice. For a device that will mostly lie forgotten in some corner of your house, we have to hand it to Xiaomi for going the extra mile with the design. The Xiaomi Mi Router 3C doesn’t need a lot of space so it’s easy to squeeze it in anywhere. It’s only available in white so it probably won’t blend in with most of your other home electronics.

There are four antennas at the back of the router that can be adjusted according to how you place the unit. The Mi Router 3C is one of the only routers in this price range to have four antennas, and we hope that this helps boost the range and overall stability of the connection. Like with most low-cost routers, these antennas are non-removable.

Around the back, we have a recessed reset button, two 10/100 Ethernet ports, one WAN port for your Internet connection, and a power inlet. In the front, there’s a single LED that changes colour depending on the network status. The base is vented in order to keep it running cool.

The Xiaomi Mi Router 3C is a single-band 802.11 b/g/n router operating at 2.4GHz. It supports a maximum Wi-Fi speed of up to 300Mbps and has 16MB of ROM and 64MB of RAM, which is quite a lot for a router in this segment. In the box, you only get the router, a power adapter, and a user manual - there's no Ethernet cable. The Mi Router 3C runs on MiWiFi OS which is based on the open-source OpenWRT platform.

Setting up the router is a very simple process. Once you plug your Internet line into the WAN port (either directly or through a cable or ADSL modem), the Mi Router 3C will automatically set up the rest. To log in and change settings, you can either direct your PC browser to miwifi.com or download the Mi Wi-Fi app for Android or iOS devices. You’ll be taken through a quick setup process where you’ll set a password for the Wi-Fi (you can change the router admin password later), and you're all set.

If you want to use the mobile app, you'll need to sign in with a Xiaomi account so that your router can be accessed remotely. This might be a bit of a security risk, but it allows you to control and monitor your router from anywhere in the world. The Mi Router 3C has one of the best looking UI we've seen in similar products. It's clean and well organised.

On the homepage, you can monitor how many devices are connected and see details such as their MAC and IP addresses and for how long they’ve been connected. You can immediately disable a device's connection, and the router remembers to block that device if it tries to connect again later. The main page also shows you how much bandwidth each device is consuming in real time, with an easy-to-grasp colour-coded pie chart.

You can monitor the total upstream and downstream bandwidth, CPU usage, and storage. There’s a handy speed test option that shows you the download and upload speed of your connection. The settings page lets you change the name of your Wi-Fi network; hide it if needed; select the operating channel; and limit the signal strength (which is set to the highest by default). You can also enable a guest login and set a bandwidth limit for this through the Advanced Settings page.

In the Security settings, you can blacklist specific devices or create a whitelist so that only ones you specifically authorise will be allowed to connect. If you’re the extremely security conscious, you have the option to add devices based on their MAC addresses. The Mi Router 3C will periodically check for firmware updates, or you can flash it manually too. Our test unit was a Chinese unit so we had to do a bit of flashing to get everything to show up in English.

On the Advanced Settings page, you can manage QoS (Quality of Service) based on what activity takes priority for you. Here, you can leave it at Auto or set the priority to Game, Webpage or Video Streaming. You also have the ability to assign fixed IP addresses to specific devices in your home like a NAS server, and you can set up port forwarding and VPN access.

The app grants you access to these functions, along with some additional controls. The first tab shows you the status of each device live. You can see the status updating as they connect and disconnect, along with the bandwidth each one is consuming. You can even limit download and upload speeds for each device here, or block websites for specific devices (although there’s no way to do a blanket ban of a website), which also works for HTTPS websites. Conversely, you can limit a device so that it can only access a set of whitelisted URLs while blocking everything else, which is a nice form of parental control.

There’s a plug-ins tab which lets you set the QoS, update the firmware, schedule a reboot, and schedule hours when the Wi-Fi is disabled. You can also let other people monitor the router’s traffic and firewall status, if you give the app permission to access your phone's contacts. One of the app-only features is Wi-Fi Boost, which analyses your signal strength, bandwidth, and Wi-Fi quality, and will automatically switch you to another channel if needed. You can also get a notification alert every time a new device connects to the router.

We didn’t face any major issues with the firmware during our review period. It does need a bit of polish, as some of the English isn’t always translated well, and there are minor glitches that crop up, like the pie chart in the status menu not always updating to show the current distribution of bandwidth between connected devices.

The Mi Router 3C performed well with most of the devices we used with it, which included a variety of laptops and smartphones. For our speed test, we had the router wired to a host laptop while we copied data to a different Wi-Fi connected laptop at different distances from the router. We used a single 1.39GB file as well as a folder of photos of roughly the same size, to test sustained and random speeds respectively. We got a sustained file transfer speed of 5.6MBps and random file transfer speed of 5.3MBps when we were in the same room with the router. At a distance of about 15m, with a couple of glass and wooden partitions between the target laptop and router, our sustained transfer speed dropped to 2.7MBps while the random file transfer speed dipped to 2.06MBps.

As far as video streaming is concerned, the Mi Router 3C offers decent enough range so that buffering time is minimal at resolutions under 720p. When using a laptop in a room about 10 meters away from the router, with a wall and some glass partitions in between the two, we still managed to stream a 1080p YouTube file. However, skipping ahead in the video introduced some buffering time. We had a similar experience with Amazon Prime Video too.

Verdict
It’s really hard to beat the Xiaomi Mi Router 3C at this price, as it delivers very good features, a useful accompanying app, and good performance. We could have used some more LAN ports as most routers available today have at least three or four. This shouldn't be a problem for those who will primarily connect to the router wirelessly, but could be a limitation otherwise. We also wish that Xiaomi had included a USB port as it would have made it so much easier to connect a printer or shared storage to the network. The firmware needs some minor tweaks, which we hope will be rolled out in future updates.

Overall, if you’re looking for a basic router that doesn’t skimp on features then the Xiaomi Mi Router 3C is a very good option at Rs. 1,199.