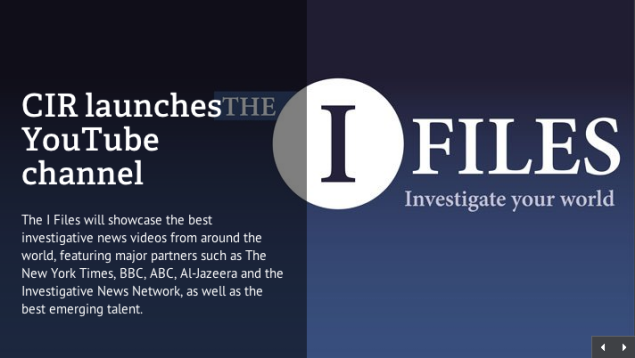 YouTube is helping to launch a new investigative channel called I Files with the Center for Investigative Reporting (CIR). The news channel is edited by CIR and has 10 videos to begin with.

The new "I Files" channel will include investigative news videos from across the globe from major media players such as The New York Times, BBC and Al Jazeera. Contributors also include public television's ITVS and a host of independent reporters and producers.

Sharing the vision behind this experiment, Stephen Talbot, Senior Producer at CIR stated on a blogpost, "The main assignment of I Files is to be timely and relevant, to provide an outlet for a citizen journalist who captures an incredible moment on camera, but above all to dig deeper and to present well-reported and engaging stories that offer real information and insights."

Talbot further states, "With The I Files, we hope to create a community of engaged viewers and video journalists who share a passion for discovering how the world really works and how it can change."

The John S. and James L. Knight Foundation is funding the project while YouTube and its parent company, Google are providing a platform for the channel's launch.

YouTube has become a source of news and information, especially in times of disaster - whether natural (a volcanic eruption in Iceland) or unnatural (the recent mass shooting in Aurora, Colo.).This was confirmed in a new study by the Pew Research Center's Project for Excellence in Journalism.

Findings in the Pew report reveal that though TV still tops the news source for most Americans, there's been a growing trend whereby more people are turning to YouTube that has established itself as a rapidly expanding platform for "a new form of video journalism.

Here's a glimpse of what I Files is about.