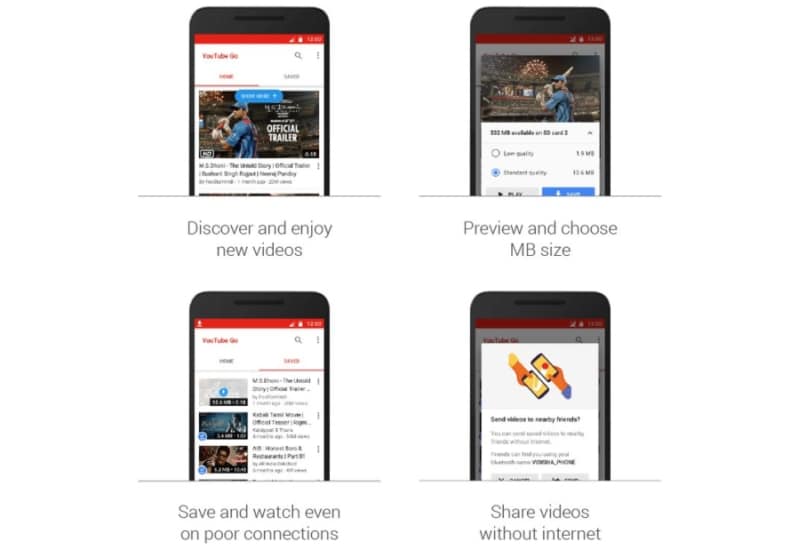 As a part of its Google for India announcements, Google on Tuesday launched a new YouTube app built from the ground up for India, called YouTube Go. The app will slowly roll out, but people can sign up to be notified when YouTube Go launches. According to the YouTube blog, Youtube Go has been built to be offline-first, and to focus on minimising data costs.

The app has some interesting new features, such as showing you a preview and the size of a video in MB before you start to play, allowing you to save videos, and to share videos with others even without Internet access. The preview shows you thumbnails from different points in the video so you have an idea of what it is even before you've started to play the video, and showing the size before hand provides transparency about data usage, whether you're saving or streaming the video.

Perhaps the most interesting new feature is sharing though - if someone else has the app as well, you can share downloaded YouTube Go videos with people nearby, entirely offline.

According to YouTube, the recommendations are also being fine-tuned, to take into account your specific location, so that you'll see more suggestions based not just on your country, but on what people in your own locality are viewing.

In 2014 YouTube had launched offline mode that allows users to download videos to watch when there was no connectivity, and then in the start of this year, it launched Smart offline which lets users schedule the downloads at night, when operators charge less for data.

According to YouTube, these changes reduce the amount of money people have to spend on data, but it was not enough. Building a new app from the ground up has led to an app that's smarter and faster, the company says. The new app will be rolled out in the next couple of months.