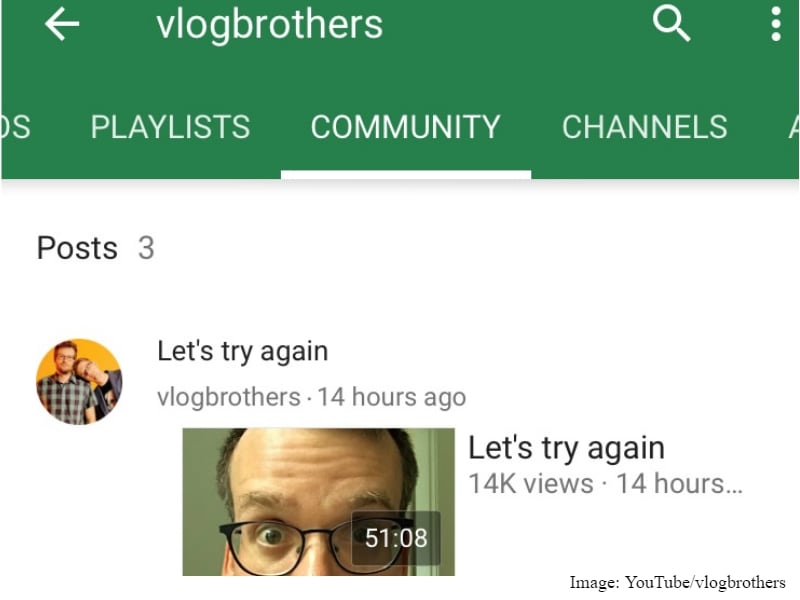 YouTube is becoming a social network. The world's largest video-sharing network has introduced a Community tab for channels, allowing creators to connect with their audience without publishing a new video. Apart from being a platform for discussions between creators and viewers, it also provides a notification system for viewers to stay up to date with the latest updates of their subscribed channel.

The new Community tab is currently being tested with 12 channels on YouTube, and is in in beta form. The company says that with feedback, it will release an improved version to more channels in the coming months.

The YouTube Community tab allows creators to share photos, text messages, gifs, and even live videos with their subscribers. With the addition of this tab, creators do not have to upload a separate video for every small announcement, and can just communicate it through the Community tTab. The tab sits in the middle alongside the Home, Videos, and Playlists tabs. You can even enable push notifications for Community posts, letting users stay up to date with any new announcements made or content uploaded.

One of the channels that YouTube is testing this feature on belongs to John Green and his brother Hank Green. Vlogbrothers channel represents the popular Nerdfighter community, and the brothers have been testing this feature for a day. They have so far posted a welcome text, a photo meme, and have even conducted a live video, garnering crazy response.

The Community tab gives creators another way to communicate with their fans directly and get feedback directly. It eliminates the need to make announcements on other social platforms like Twitter and Facebook. The tab could be used to announce upcoming videos and live streams, contests, and many other things. The tab is visible on desktop, and the latest version of Android and iOS.

The Google-owned video-sharing network made the announcement in a blog post on Tuesday, where it also details the complete list of 12 channels that currently enjoy the new feature.

"Community is a special release for us because it represents the deepest product collaboration we've ever done with creators like you. We started by inviting creators in early to develop, in partnership with us, the tools they wanted to better engage with their fans... This is a first step and, with creator and fan feedback, we look forward to rolling out new features and functions as well as including more creators in the months ahead," said Kiley McEvoy, Senior Product Manager, on the blog.

YouTube recently updated its Android app to bring a new redesigned navigation bar alongside minor refreshes. In July, the company rolled out new comments UI which showed likes, dislikes, replies, and even let users sort them.