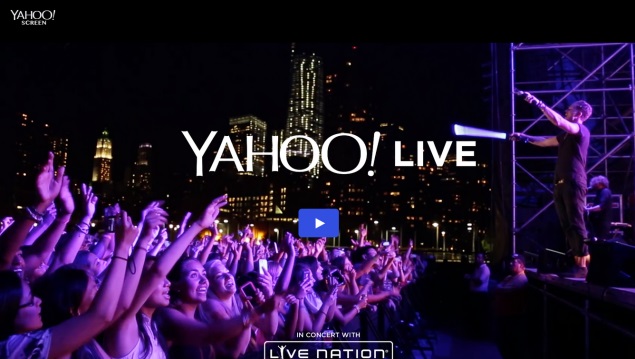 Yahoo on Friday continued its shift to online content with a line-up of free streaming concerts by music stars such as Usher, Michael Franti, and The Dave Matthews Band.

"In today's on-demand entertainment environment, live experiences are the only ones that we all share together, at the same time," Yahoo chief marketing officer Kathy Savitt said in a release.

"Together with Live Nation, we are excited to bring millions of fans together to share these moments through the new Yahoo Live experience."

A glimpse of the schedule for the first month at yahoo.com/live promised performances by John Legend, Justin Timberlake, OneRepublic, Everclear, Airborne Toxic Event and other music stars.

"This channel will create a powerful new way for artists to continue to grow their global fan base," Live Nation chief executive Michael Rapino said in a release.

Concerts can be streamed through Yahoo Screen software on a wide array of Internet-linked devices including Roku, Xbox 360 consoles, AppleTV, desktop computers, and mobile devices powered by Apple or Android software, according to the Sunnyvale, California-based technology firm.

Yahoo has been shedding its online search engine past in favor of a future as a venue for premier digital content and services, particularly aimed at smartphones and tablet computers.

Yahoo has also been investing in original programming.