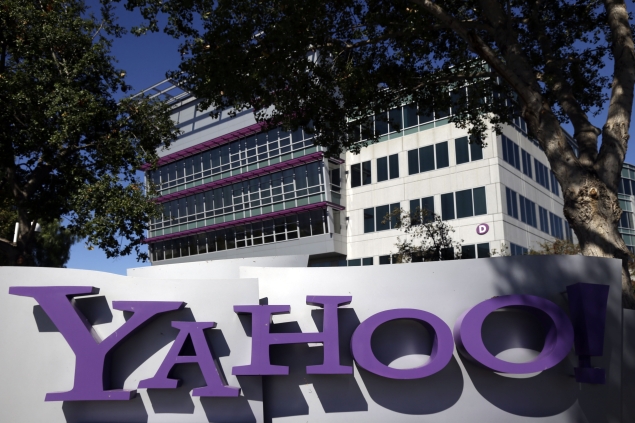 The California Internet company said it earned $312 million on revenues of $1.1 billion, topping most analyst forecasts.

Profits were down 20 percent from a year ago with revenues nearly flat for Yahoo, which has been making major shifts under Mayer, a former Google executive.

"If you look at our core businesses which we define as search and display you see an important shift," Mayer said in an earnings call.

"More than half of Yahoo's total monthly audience joins us on a mobile device," she said.

Yahoo shares vaulted higher by some 6.7 percent in after-hours trade following the release to $36.50.

Victor Anthony at Topeka Capital Markets said in a research note that Yahoo's revenue was slightly better than expected and that he was "cautiously optimistic on the core" outlook.

Under Mayer, Yahoo has been revamping many of its offerings while emphasizing mobile services and using cash for a series of acquisitions.

Yahoo is also moving more into video, with plans for its original television programs in the works.

Mayer said the company is making headway in boosting mobile, both in terms of search and in apps, which have leading positions on mobile platforms such as Apple's iOS and Google Android.

The Alibaba factor
Yahoo is also a key shareholder in Chinese Web giant Alibaba, which is in the process of launching an initial public offering in the United States.

After an IPO, Yahoo, one of the early investors in Alibaba, has the right to sell its remaining shares.

The Chinese firm has not yet released details on its financing, but Yahoo's figures showed Alibaba with a 2013 fourth quarter profit of $1.35 billion on some $3 billion in revenues.

The IPO is expected to be the largest in the tech space since Facebook's in 2012, with Alibaba's value estimated at some $150 billion.

Yahoo has a 24 percent stake in Alibaba, and is expected to sell around 10 percent of the capital at the time of the IPO.

"We continue to recommend aggressive purchase of the shares ahead of the Alibaba IPO. We expect an IPO filing in a few weeks," he said.

Yahoo has been sputtering as it tries to refocus after losing its position as the Web's leading search engine to Google.

According to the research firm eMarketer, Yahoo's share of worldwide digital ad revenues declined to 2.9 percent in 2013, down from 3.4 percent in 2012, while Facebook and Google boosted their positions.