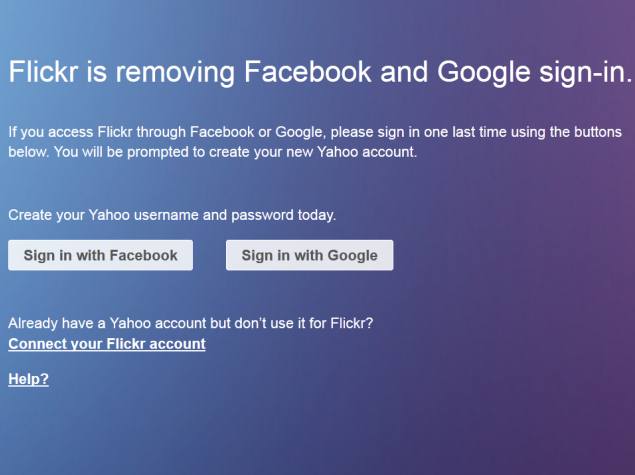 At present, users can sign-in one last time using their old Facebook or Google credentials, after which they will be prompted to create a new Yahoo account. Users can either use an existing Yahoo account, or create a new one, while keeping the same Flickr account.

The company also notes that this procedure won't affect any paid services used already, such as Flickr Pro.

Notably Yahoo had integrated these third-party logins three years ago in 2011. Back in March this year, the company had announced that it will stop letting consumers access its various online services, including photo-sharing site Flickr and Fantasy Sports, by signing-in with their Facebook or Google credentials. Notably the change has been already deployed to Fantasy Sports.

"Yahoo is continually working on improving the user experience," the company had said in a statement, noting that the new process "will allow [it] to offer the best personalized experience to everyone".

Flickr was created by a Vancouver-based company Ludicorp in February 2004, and which was acquired by Yahoo in March 2005 for an estimated $35 million. In March 2013, the website had a total of 87 million registered users and more than 3.5 million new images uploaded daily.
Affiliate links may be automatically generated - see our ethics statement for details.
Comments