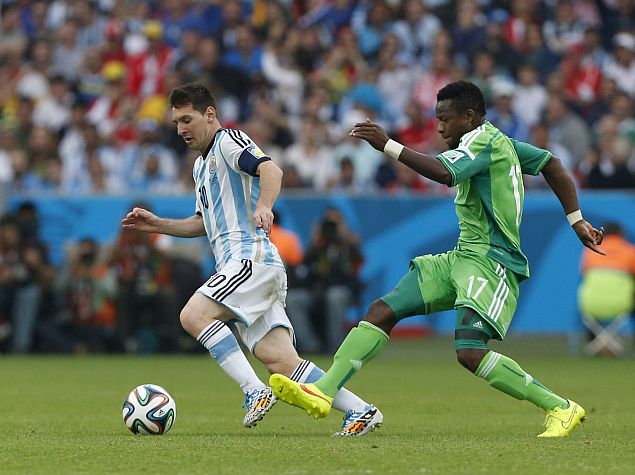 Moments after Uruguayan striker Luis Suarez sunk his teeth into an opposing Italian player during Tuesday's World Cup match-up, brands were using the incident to market burgers on Twitter.

Suarez's mid-game snack -and Italian forward Mario Balotelli's Twitter plea for a kiss on the cheek from Queen Elizabeth- drew massive online attention this week as the initial group stage matches played out. More than 300 million tweets have been sent about the World Cup so far, and Google has logged over 1.1 billion searches related to the world's most popular sporting event.

While the tournament's June 12 kickoff game between Brazil and Croatia still drew the most tweets of any match, people paid more attention to this week's games, at least as measured by matches they viewed online.

Here's a look at how the World Cup fared online this week:

Streaming traffic soars
Thursday's concurrent U.S. vs. Germany and Portugal vs. Ghana games hit a peak of 6.8 terabits per second in online streaming traffic, according to Akamai Technologies Inc., which helps companies distribute online video and works with more than 50 World Cup online streaming rights holders worldwide. That rate of consumption is a new high for a live-streamed sporting event that Akamai has delivered and "very easily one of -if not the- largest live events that's been delivered on the platform," said spokesman Chris Nicholson.

Unlike during previous World Cups, this year even U.S. cord-cutters were able watch group stage matches online, as TV providers such as Univision offered free streaming on its website and mobile apps. ESPN is also streamed the matches, but it required pay-TV credentials.

Once bitten...still hungry?
Before he bit Italy's Giorgio Chiellini, Suarez received about 100,000 mentions on Twitter, according to the short messaging service. After the bite: Two million. Brands from burger chains to candy bar makers used the chomping as an opportunity to market their arguably more appetizing goods. "Chew Trident, not soccer players," read one tweet from the gum maker. "If only Suarez had Whataburger before the game he wouldn't be so hungry," read another from the Texas-based hamburger chain.

Popularity contest
Portugal's Cristiano Ronaldo is beating longtime rival Lionel Messi of Argentina - at least when it comes to Google searches of his name, according to the Internet giant. On Twitter, though, Messi kept the top spot as the most tweeted-about player, followed by Brazil's Neymar Jr. and post-bite Suarez. Ronaldo, meanwhile, came in at No. 4.

(Also Read: How to Follow World Cup Beyond Live Video)

Photo shoots
On Instagram, the popular Facebook-owned photo-sharing app, soccer fans used hashtags such as (hash)WorldCupPets, (hash)WorldCupPup and (hash)FifaCat to tag photos of their pets decked out in World Cup gear. Players, including U.S. forward Clint Dempsey, meanwhile, took part in the app's "TBT," or "Throwback Thursday" trend, posting photos of their younger selves. Dempsey sent out a yearbook photo. A question above his smiling photo reads "Where do you hope to be five years from now?" Dempsey's answer reads "Playing professional soccer in Europe."