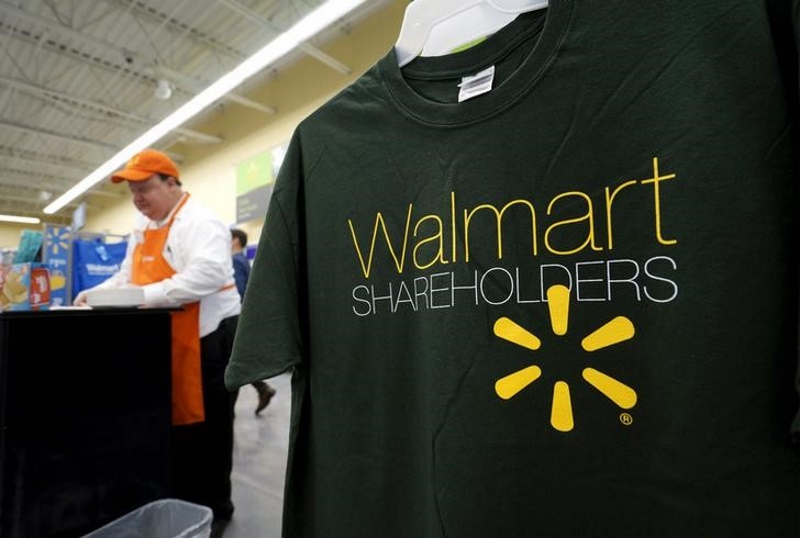 Wal-Mart's tiny warehouse in eastern Shanghai doesn't look like much. But it's a key part of the company's strategy to win over grocery customers in China who are fast heading online.

Inside, on a recent visit, a reporter found six-packs of toilet paper and bottles of oil on the concrete floor next to piles of boxes filled with other groceries. In the corner, a Wal-Mart employee punched orders into a computer. Moped drivers whizzed in and out, loading up goods to be delivered to apartment buildings within a few miles.

It's one of 250 hubs that Wal-Mart's Yihaodian e-commerce venture owns and operates in 200 cities, mostly concentrated in eight key cities like Shanghai and Beijing. All offer quick delivery of groceries.

How quick? Within three hours in some places for 100 to 150 items; overnight in others that extend to several hundred thousand grocery items.

Wal-Mart has been stepping up its efforts to get a bigger share of China's overall online business, which now has surpassed the US and dominates globally. Last July, four years after buying a minority stake, the world's largest retailer took full control over Yihaodian, founded in 2008. But Wal-Mart's overall online share is tiny in China, and some analysts say it's going to be hard to close the gap with the big Chinese giants like Alibaba and JD.com.

Where Yihaodian has 250 hubs, Alibaba has 14,000 in rural China alone that act as pick-up stations. And as of late March, JD.com had a total of nearly 6,000 delivery and pickup stations in 2,493 counties and districts across China.

"It will be very difficult for Wal-Mart to catch up in e-commerce," says Jason Yu, general manager of Kantar Worldpanel China, which specializes in research on Chinese shopping habits.

Wal-Mart is behind for many reasons. Most of these Chinese retailers have been online for years, and they understand the nuances of Chinese shopping behavior. Wal-Mart's online business has also been hobbled because it did not have full control over the Chinese venture.

Online, Wal-Mart has just 1.6 percent of China's overall online market, ranking it as No. 6, well behind No. 1 powerhouse Alibaba 46.9 percent and second-ranked JD.com's 20.1 percent, according to Euromonitor International, a global research firm. And the Chinese online giants and a swarm of smaller online food players are nibbling at Wal-Mart's food business.

Wal-Mart's goal is to be among the top three overall by expanding the number of hubs and blending its online services with its stores. Last year, it launched an app that lets shoppers order online and pick up the goods at the store in several southern cities including Shenzhen, Guangzhou and Dongguan. It's also focusing on high-quality goods at low prices. And so as it expands its offerings, it's highlighting imported food to cater to middle class shoppers looking for premium goods.

Wal-Mart is using food as a key strategy to get online shoppers to buy more frequently. If they become loyal food shoppers, they'll more likely buy other things like TVs and laptops. Getting its online business right is critical for Wal-Mart's overall success in China as the retailer, along with other big store rivals, wrestle with traffic declines at their stores.

In a country where shoppers like to feel and touch their vegetables, it may seem odd that online food shopping is taking off. But after some highly publicized food safety scares, the Chinese are increasingly turning to online food retailers whose quality they trust. And for a growing number of working city dwellers who are time-starved, this offers the most convenient solution.

"I seldom go to the shopping mall or supermarket. Mainly online," said one Yihaodian customer, who would only identify herself as Ms. Huang. She was taking delivery of several flavors of melon seeds and other snacks at around 12:30pm on a recent week day. She spent CNY 270 ($41.68 US) and had placed the order at 10:06pm the night before, according to Wal-Mart records.

Nearly half of Chinese shoppers, or 46 percent, are already buying groceries online for home delivery, compared to 25 percent globally, according to a consumer poll of 30,000 online respondents by Nielsen, a market research firm. The survey tends to skew to a younger and more affluent base. That figure is 47 percent for the US. The Chinese also are increasingly likely to shop by phone: 47 percent of traffic to the Yihaodian site comes from mobile devices, up from 28 percent two years ago. Likewise, 64 percent of Yihaodian orders are made from mobile devices, up from 14 percent over the same time period.

Shoppers demand top-quality goods online. That's a big difference from a few years ago, when they turned to the Internet to find the cheapest goods, says Wang Lu, president and CEO of Wal-Mart Global e-commerce in Asia, who took over the helm of Yihaodian last year. Yihaodian is also working with Wal-Mart's global sourcing team to deliver South African grapefruit, Chilean apples and other distinctive imports. In fact, 32 percent of its shoppers now buy imported goods, with the top three in dairy, biscuits and snacks like chips and seaweed. They're also focusing on fresh food and dumplings.

For same-day delivery, Yihaodian offers 250,000 products in eight cities, and next-day delivery in more than 200 cities. It's also expanding its assortment of goods online. Now, Yihaodian carries about 11 million products, with 90 percent of customers buying beverages and other foods. And it is finding ways to customize product offers to individual shoppers, using app messages and other forms.

So while Yihaodian has challenges ahead on its home turf, it has much to teach the mothership.

Three months after Wal-Mart fully took over Yihaodian, the Chinese venture sent an elite team of 20 people to Wal-Mart's e-commerce headquarters in San Bruno, California. They spent a week with their American counterparts, sharing their experience.

When it comes to online sales, China is "several years ahead ... of the United States," said Wal-Mart's Wang Lu.