People on Twitter lauded the 37-year-old CEO, who is often credited with turning the fortunes of the company 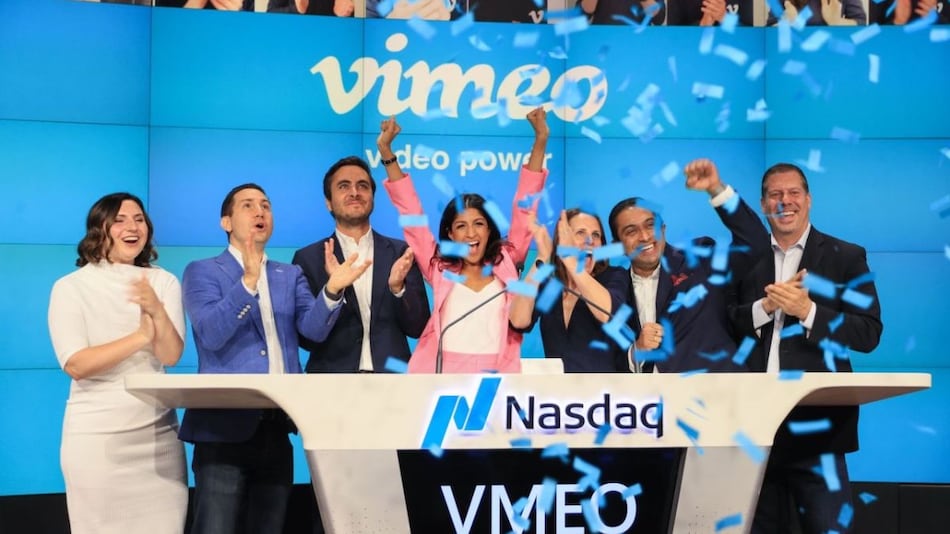 Anjali Sud, the 37-year-old Indian-American CEO of Vimeo is credited for much of the company's success

Anjali Sud, the CEO of Vimeo, a video hosting platform extremely popular with creators, on Tuesday, shared a special moment just before she took her company that was once thought to be YouTube's weird cousin public. She tweeted a picture of herself with her son and said: "Good luck hugs before mama rings the opening bell to take @Vimeo public. Can't believe this day has arrived". Not many know but the bell ringing ceremony at the Nasdaq MarketSite located in TimesSquare, Manhattan is of enormous significance for a company and its employees for showcasing their talent, work, and achievements to a global audience.

The senior executives of Nasdaq host the opening as well as the closing ceremonies that offer a platform to companies to "generate meaningful brand exposure”. During the opening and closing bell ceremonies, when companies like Vimeo get officially listed on the stock exchange, get access to one hour of exclusive advertising on the Nasdaq Tower and Marquee, it says on their official website.

Coming back to Sud's tweet with her son, the image has won a lot of hearts, and encapsulated what it means to be a woman leader, who has taken a young company to exceptional heights, alongside being a mother.

Later in the day, Sud once again tweeted a photograph with her entire team on the Nasdaq stage. The picture was shot after Vimeo officially went public. Mentioning that Vimeo has gone public, Sud added that “it has been a 16-year labour of love, rooted in our belief in the power of video”. She also thanked “everyone who made today possible”.

Today @vimeo is a public company.

It has been a 16-year labor of love, rooted in our belief in the power of video. We put creators first, and put that power in the hands of millions.

To everyone who made today possible: Thank you ????

Soon after, people lauded the 37-year-old CEO. A user @TarunBharadia said that the story of the “first Indo-American woman CEO” taking a company public was “inspirational”, and added, “More than anything, I like the suit, and this picture. Such a cool momma”.

First Indo American woman CEO to take the company public! Love to see it✨
Such a inspirational story ❤
& More than anything , I like the Suit & this picture :)
Such a cool Momma! ????

Another user, @stephers1313 congratulated Sud on her “big day” and said that she was “incredibly articulate”.

Watched you speak on BBG today, you're incredibly articulate & I thought it was a dynamic interview. Congrats on your big day!

Congrats Anjali!! Pushing the boundary for women founders to excel and show the world anything is possible!!💪 Congrats 👏👏👏👏 pic.twitter.com/vJlLUeOunN

Congrats Anjali!! Such an inspiration!

Vimeo has gone public, which speaks for its success. However, the story was not the same when Sud had joined the company. The Internet video platform back then aspired to compete against the likes of Netflix, Amazon Prime, and HBO.

Seven years ago, when Sud was the director of marketing at Vimeo, she had a different plan and vision for the platform. According to her, Vimeo's future wasn't in Hollywood but elsewhere. The mantra, as per her, was to shift the focus from entertainment to entrepreneurs.

“Vimeo had long been a software company for filmmakers, but the market was too small,” Sud was quoted as saying by Forbes in their April issue. “There was another, much bigger market—businesses. What Squarespace and GoDaddy did for websites, we could do with video.”

According to another report in The Verge, the key was also to understand that Vimeo wasn't really prepared to take on the likes of Netflix or Amazon Prime. "I developed a point of view, myself and a few others within the company, that we probably weren't going to compete well with Netflix in original content because we probably weren't going to have $17 billion to spend on it," Sud said.

Now, the company has more than 800 employees across the world.