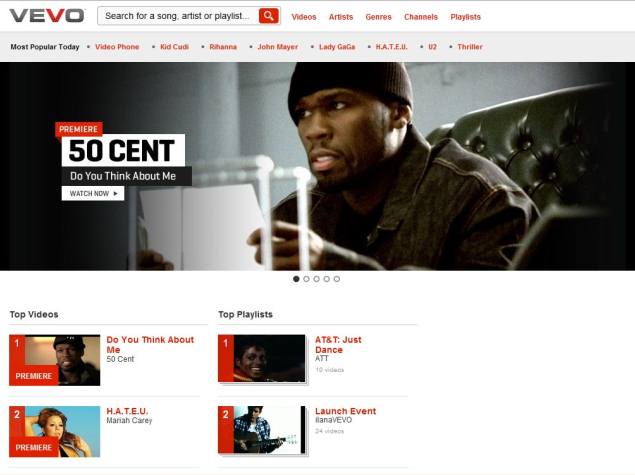 Vevo, the online music video hub that is a joint venture of two of the world's biggest music labels, has seen a nearly 50 percent increase in the number of music videos streamed each month from its platform, the company's top executive said on Tuesday.

The company, which is controlled by Universal Music Group and Sony Music Entertainment, hit a monthly average of nearly 6 billion views in December, a 46 percent rise from a year earlier, said Rio Caraeff, the chief executive officer.

About 65 percent of the videos are being watched on mobile phones, according to the company.

"On a global stage, it's really all about mobile," Caraeff said in Miami, where he was participating in the Billboard Latin Music Conference. "Mobile and tablet and television are where the majority of the views are happening."

Google Inc is a minority stakeholder in New York-based Vevo, which was founded in 2009. Universal Music is a unit of Vivendi SA , and Sony Entertainment is part of Sony Corp.

The online music video service started out distributing videos to AOL and Google's YouTube, creating revenue from a portion of the advertising revenue it generated.

Of the approximately 6 billion music videos streamed each month, 5 billion occur outside the United States, Caraeff said. The top countries include the UK and Germany. Vevo offers its own service in more than 13 countries and will soon roll out in Mexico.

The most watched video ever is teen pop star Justin Bieber's "Baby" with over 1 billion streams, according to the company. Last year, Pink's "Just Give Me a Reason" topped Vevo's list of the most viewed videos.

Caraeff said the company is holding conversations with potential investors as it seeks to expand. He declined to say who the company has spoken with. The Wall Street Journal has reported Vevo held talks with financial services firm Guggenheim Partners.

"We are continuing to speak to investors as we try to find the right partners to grow the business more rapidly than we've been able to do so far," Caraeff said. "We're still very active in that process."

Last week, Vevo, which provides some of the most popular content on YouTube, expanded its content partnership with Yahoo in a deal that brings Vevo's music videos and other programming to Yahoo's video channel, Yahoo Screen, in the United States and Canada.

The partnership is expected to soon extend to Britain, Germany, Spain, France and Italy as well as the Yahoo Screen mobile app.

Vevo's videos have been featured on Yahoo Music since 2012 and the deal highlighted Yahoo Chief Executive Marissa Mayer's strategy to increase video views as she tries to find ways to encourage users to spend more time on Yahoo's websites.