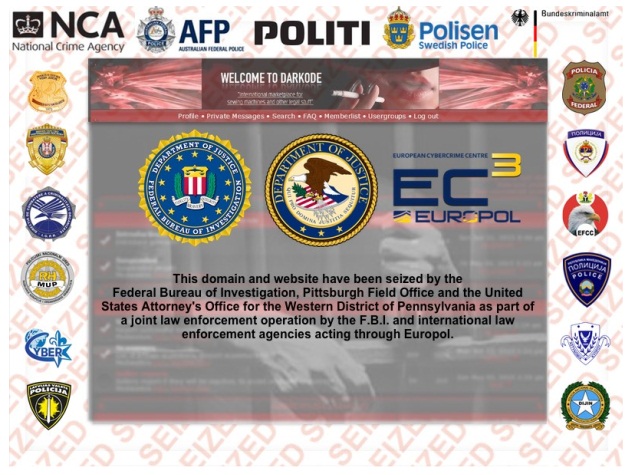 US authorities working with law enforcement officials abroad have shut down the Darkode online forum used by cyber-criminals around the world and charged 12 people linked to the site, the Justice Department said on Wednesday.

US Attorney David Hickton announced the charges in Pittsburgh and called Darkode "a cyber hornet's nest of criminal hackers."

"Of the roughly 800 criminal Internet forums worldwide, Darkode represented one of the gravest threats to the integrity of data on computers in the United States," he said.

The Federal Bureau of Investigation and US attorney's office in Pittsburgh led the investigation, known as Operation Shrouded Horizon. It included authorities from Europol and 20 countries in Europe and Latin America as well as Israel, Nigeria and Australia.

The Justice Department said 12 people were charged, mostly in the United States, in what it called the largest coordinated international law enforcement effort ever directed at an online cyber-criminal forum.

Europol said there had been 28 arrests.

The investigation is continuing as authorities look into a total of 70 Darkode members and associates worldwide, the Justice Department said.

Cyber-criminals used Darkode to trade stolen data as well as hacking and spam tools and services, and methods for cyber-attacks on governments and companies. It was an invitation-only website, hidden by well protected Internet servers.

The darkode.com website on Wednesday showed logos of various law enforcement agencies and a notice saying the domain had been seized by the FBI as part of an investigation with international agencies.

"Darkode was unusual because it was a virtual crossroads for criminal hackers from a variety of languages, countries and backgrounds," said Brian Krebs, who writes about cyber-crime on krebsonsecurity.com and had infiltrated the forum in order to study it.

"For many years, some of the most accomplished cyber-criminals sold their wares and services on this forum, including everything from denial-of-service attacks for hire to malicious software and stolen identities and credit cards."

Those charged are accused of crimes including conspiring to commit computer fraud, wire fraud and money laundering, selling and using malware programs that could steal data from computers and cellphones and using "bot" networks to take over computers and send spam emails.