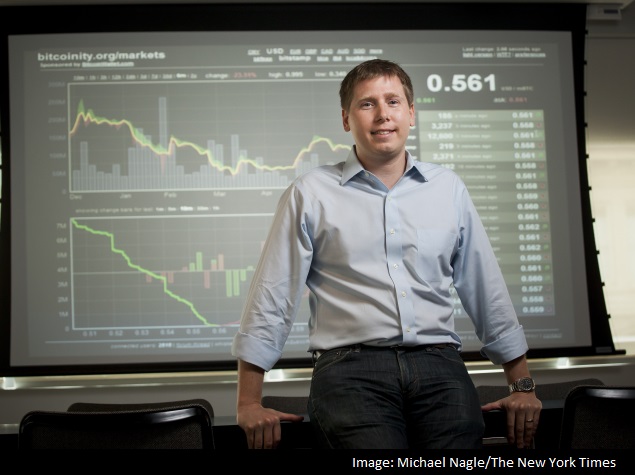 On its face, it looked like a typical government raid: Federal agents shut down an online drug marketplace, seizing millions of dollars of ill-gotten gains in the process.

But there was just one problem. The money was in Bitcoin. And since last fall, the government has been trying to figure out how it can sell it for the maximum amount.

The federal government is responsible for selling property taken from criminals, including cars, yachts and fine jewelry. But Bitcoin, a computer-driven virtual currency that exists entirely online, is neither fish nor fowl.

If the government dumped all the coins on the open exchanges where Bitcoins are bought and sold, it could significantly depress their price.

So instead, with help from the FBI and federal prosecutors in Manhattan, the U.S. Marshals Service has arranged an online auction for nearly 30,000 of the Bitcoins it seized from the now-defunct market Silk Road, which federal prosecutors shut in October and have accused of aiding the sale of cocaine, Ecstasy and other illegal goods and services.

"Selling Bitcoin with its somewhat liquid market is not the same as auctioning off a 1998 Chevy with a couple of bullet holes in the driver's door," Steven Englander, a research analyst with Citigroup, wrote in a note Wednesday.

Experts are divided on whether an auction of that many Bitcoins, which represent a substantial percentage of the average daily trading volume, will push the price down anyway.

Furthermore, the auction's setup has been an opaque and, at times, slapdash process. A list of potential bidders was accidentally released June 18 in an email from the agency, which had said that it would not release any information about the bidders or winning bids.

"The U.S. marshal specifically has never had to auction off this type of asset," said Gil Luria, an analyst with Wedbush Securities who has studied Bitcoin. "They're figuring it out for the first time, and maybe that's why the process hasn't been completely transparent."

The government has provided some details about the process. Bidders will have a 12-hour window Friday to submit one sealed bid for the coins, which have been broken up into lots of 3,000. The winners will be notified Monday. Only about 20 percent of the Bitcoins that were seized from Silk Road will be auctioned, providing a test run if the government decides to sell the rest.

The authorities are also concerned with Bitcoin's potential to be used for illegal activity, and the agency screened potential bidders.

Bidders had to prove their identities and that they had at least $200,000 in cash. They also had to certify that they were not affiliated with Silk Road or its founder, Ross Ulbricht.

But for bidders, the auction process was less transparent. Questions about the auction from would-be bidders were answered only in writing by a general email inbox. And apparent typographical errors in the initial instructions posted on the Marshals Service's website made it unclear when the registration deadlines were. Some bidders also said other aspects of the process had been vague.

The problems, particularly the accidental release of names, could affect how much money the government raises from what it hoped would be an efficient auction.

In the days after the leak, people on the recipient list exchanged emails with one another, turning what should have been an anonymous communication into an open forum. "The leak has definitely changed the dynamics," said Charles Allen, the chief executive of the Bitcoin Shop, whose name was on the list.

The mistake also spurred unease among recipients of the message, he added.

"People have been very concerned about their privacy," Allen said. The leaked list included prominent names in the Bitcoin world like the payment processor Coinbase and the entrepreneur Barry Silbert, which could scare off smaller bidders from participating, some experts said. On the flip side, it could also entice other wealthy investors who do not want to sit on the sidelines.

"Either this was a very clever piece of disinformation or a very careless error by the government. It's a little hard to know which from a distance," David L. Yermack, a professor at New York University's Stern School of Business, said of the leak. "You want to create the illusion that there's immense demand for this if you're the government because you want people to bid as much as they're willing to."

The Marshals Service made it clear publicly that the leak was unintentional.

Bitcoin, created by an anonymous computer programmer, or group of programmers, at the height of the financial crisis, appealed to an anti-establishment following that liked the idea of avoiding the banking system and government regulation.

Users can either buy Bitcoins from one another or "unlock" them by solving complicated mathematical algorithms. Since Bitcoin first appeared online in 2009, the price has fluctuated wildly, from a few pennies to over a thousand dollars at its peak. The original programmers intended to create a finite number of Bitcoins, which could make acquiring large quantities difficult.

Over the years, however, Bitcoin has reached a broader audience thanks to the public backing of technologists, venture capitalists financing Bitcoin enterprises and retailers accepting payment in Bitcoin.

It is that audience the Marshals Service hopes to tap in its auction. Because of some of the missteps and the unprecedented nature of the auction, estimating how much the government will raise is difficult. The Marshals Service often conducts sealed-bid sales, but auction experts say that can discourage bidders from participating.

Some bidders said their strategy relied more on game theory than financial analysis. But game theory, in which players size up one another knowing that their opponents are doing the same, is much harder when the game is kept a secret.

Because participants in the auction will not know the size of the bidding pool, they are likely to bid cautiously, said Lawrence M. Ausubel, a professor of economics at the University of Maryland and an auction theory expert.

Bidders may be willing to pay a premium to acquire a big lot of Bitcoins.

Silbert, the entrepreneur who runs a Bitcoin investment fund through his firm SecondMarket, said his bid would be determined by the bids from his clients, who were participating as part of a consortium.

"We have no discretion," Silbert said. "We are bidding based on where all the bids come in into our syndicate."

Because of Bitcoin's volatility and lack of historical data, it is difficult to compare the auction of Bitcoin to the auction of Treasury bonds, or other financial instruments that trade openly. At the same time, Bitcoin's price - it currently trades around $600 - will anchor Friday's bids to some degree.

"If it's a Picasso, or if it's an oil field where basically you don't know what the correct price is, you might say that the Picasso is anywhere from a million to 10 million," Englander said. "It's not like a Treasury bond, where you could get the price to four decimal places."