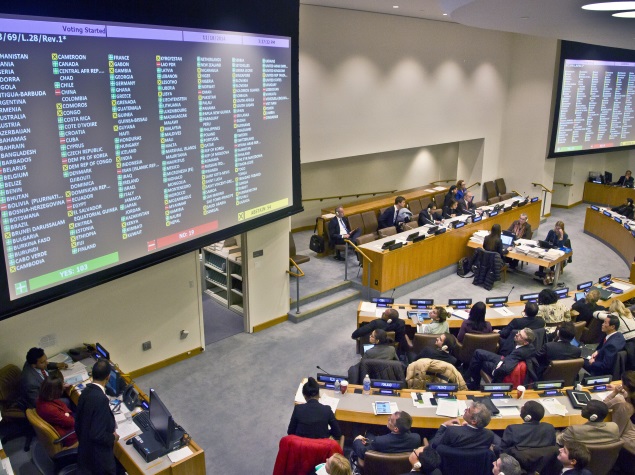 A United Nations General Assembly committee on Tuesday expressed concern at digital spying and said unlawful or arbitrary mass surveillance, interception and collection of online data are "highly intrusive acts" that violate the right to privacy.

But a reference to metadata surveillance as an intrusive act was removed from the resolution, which was adopted by consensus, to appease the United States, Britain, Australia, Canada and New Zealand, known as the Five Eyes surveillance alliance, diplomats said.

Metadata is communications detail such as which telephone numbers were involved in a call, when calls were made, how long they lasted, when and where someone logged on to email or the Internet, who was emailed and what Web pages were visited.

"Lawful surveillance, subject to appropriate safeguards and oversight, can be an important tool to protect individuals from criminal or terrorist threats and access to telecommunications metadata can be an important element of the investigation of such threats," an Australian delegate told the U.N. Third Committee, which deals with human rights, after the vote.

The resolution drafted by Germany and Brazil does still mention metadata for the first time, warning that "certain types of metadata, when aggregated, can reveal personal information and give an insight into an individual's behavior, social relationships, private preferences and identity."

But Canada said any further global discussions on metadata should not be limited to U.N. diplomats.

"If our muddled discussions on metadata are any indication, these conversations cannot take place between diplomats alone. They require the collective expertise of all stakeholders: governments, industry, civil society and the technical community," a Canadian delegate told the Third Committee.

The resolution was approved by the 193-member committee as a follow-up to a similar text adopted last year after former U.S. National Security Agency contractor Edward Snowden exposed a spying program by the NSA, sparking international outrage.

"Without the necessary checks, we risk turning into Orwellian states, where every step of every citizen is being monitored and recorded in order to prevent any conceivable crime," Germany's U.N. Ambassador Harald Braun said on Tuesday.

It calls on states to provide an effective remedy when a person's right to privacy has been violated by unlawful or arbitrary surveillance and encourages the U.N. Human Rights Council to consider establishing a special procedure to identify and clarify standards protecting privacy rights.