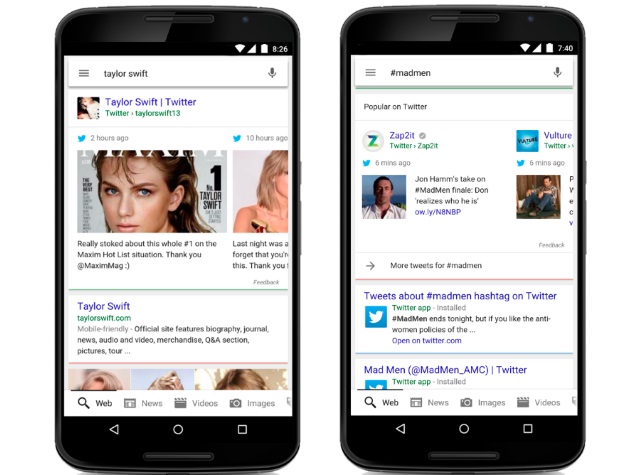 Google and Twitter announced a partnership Tuesday to display tweets in search results, renewing a tieup that ended in 2011.

The move will allow Google to get more real-time results in its search queries, and help Twitter boost engagement after a period of sluggish user growth which has weighed on its stock price.

The deal will start with search results within the Google app and mobile Web, with a desktop version coming, said Messerschmidt, adding that the feature is due to reach more countries "in the coming months."

"For example, if you're interested in hearing more from Taylor Swift, a quick search on Google will pull up her most recent tweets," she said in a blog post.

"Or, if you're a TV buff, a search for #Madmen will bring up the most relevant news and Tweets about Sunday's series finale."

The two firms had a similar arrangement dating back to 2009, but tweets disappeared from Google search results in 2011.

"It's a great way to get real-time info when something is happening," Google product manager Ardan Arac said in a separate post.

"And it's another way for organizations and people on Twitter to reach a global audience at the most relevant moments."

Danny Sullivan of the tech blog Search Engine Land said the deal calling for a graphical display of tweets may give Twitter more traffic, if not revenue.

"Tweets have continued to be in Google since that last deal. The new deal just allows for more of (that) and with deeper integration."