Trump Threatens to 'Take a Look' at Google's China Ties

Trump repeated accusations made previously by Peter Thiel, a co-founder of PayPal and venture capitalist. 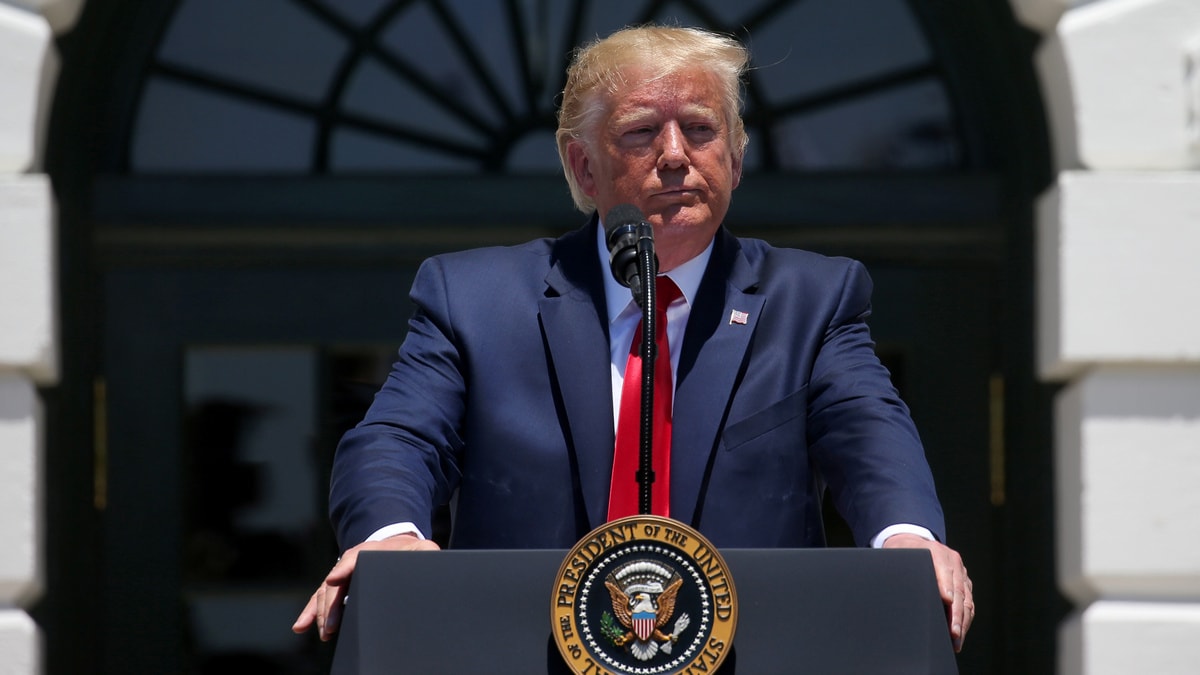 President Donald Trump on Tuesday appeared to threaten that his administration would "take a look" at Google, opening an investigation into the search giant out of concern that it has been breached by the Chinese government.

Trump's shot at Google came in a tweet that cited recent comments from Peter Thiel, a top venture capitalist and one of the president's supporters, who this week called for the FBI and CIA to probe the company on grounds it may have committed treason for its operations in China.

Trump did not elaborate on what he intended to do, beyond appending a short thought to a quotation he appeared to attribute to Fox and Friends, and a spokesman for the White House did not respond to a request for comment.

"As we have said before, we do not work with the Chinese military," Riva Sciuto, a Google spokeswoman, said in a statement.

But Trump's threat of an investigation marks only his latest salvo at Google, which he has accused in recent weeks of silencing his conservative supporters online and seeking to rig US elections in favour of Democrats. The company has denied each of those charges, but Trump often has threatened to regulate, penalise and file lawsuits against Google and its Silicon Valley peers anyway.

Accusations of links between Google and China also came up during a Senate Judiciary subcommittee hearing Tuesday afternoon on whether Google discriminates against conservative views in its search and moderation functions. Sen. Josh Hawley, R-Mo., a critic of Silicon Valley, used the hearing to press Google's vice president for public policy, Karan Bhatia, on whether Google had cooperated with China's censorship requirements.

Bhatia responded that Google had "exited" China in 2010 because "the censorship regime was not compatible with our values." He denied that there were any plans to reintroduce Google's search engine in China.

Bhatia also denied that Google had been infiltrated by Chinese intelligence operatives, a claim Thiel had made earlier in the week and repeated Monday night during an interview on Fox News. "We see no evidence of that," he said.

Thiel said this week that China's top military and intelligence officials are "likely to have infiltrated Google," a claim he repeated during an interview on Fox News.

"We see no evidence of that," Bhatia said.

"There's this very peculiar background where Google is working with the Chinese on Communist government and not with the US military," Thiel said. He later appeared to blame the decision to end the Pentagon contract, for a program called Project Maven, on a "broad base of Google employees that are ideologically super left-wing, sort of woke, and think that China is better than the US, or that the US is worse than China."

Google's ambitions in China previously had drawn widespread concern throughout the Trump administration and among congressional Republicans, partly because of the potential that Chinese spies could steal the company's technology - including its AI advancements - if it advances its operations there.

"The work that Google is doing in China is indirectly benefiting the Chinese military," Marine Gen. Joseph Dunford, chairman of the Joint Chiefs of Staff, told Senate lawmakers at a hearing earlier this year. "We watch with great concern when industry partners work in China."

Asked about Dunford's statement, Bhatia reiterated that Google does not have business operations in China. He said that a program Google reportedly was working on to create a search engine that would be allowed to operate in China had been shut down.