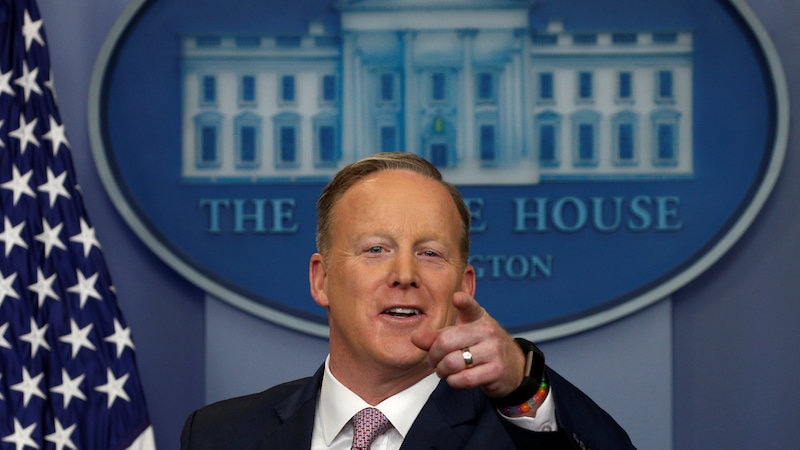 Visibly tense, Sean Spicer took the podium in the White House briefing room Monday, made a joke about how unpopular he is, and then launched into the subjects of the day, from Syria to China to health care.

It was Spicer's first official briefing as White House press secretary, and he clearly was trying to smooth things out with reporters - two days after attacking them with a vengeance, calling their work "shameful."

For about 90 minutes, Donald Trump's spokesman responded to questions on a wide range of topics, reinforcing the idea that the new administration's style is going to fluctuate, much like Trump's tweets - from angry and vengeful to conciliatory and unifying.

While the 49-seat briefing room in the West Wing is usually full to capacity when the president appears, it is often far less full for his spokesman's daily briefings.

But with Trump's arrival in office on Friday, it was hard Monday to walk through the room - made famous in films and television shows like "The West Wing" or "Veep."

Spicer undoubtedly listened to the advice of one of his predecessors Ari Fleischer, George W. Bush's former spokesman, who suggested on CBS that he "cool the confrontation down a notch or three."

Spicer told reporters: "I want to make sure we have a healthy relationship."

"Is it your intention to always tell the truth from that podium?" asked one reporter.

"Yes, I believe we have to be honest with the American people. I think sometimes we can disagree with the facts. There are certain things that we may not fully understand when we come out," Spicer replied.

"Our intention is never to lie to you."

'Alternative facts'
On Saturday, in a brief statement from the same podium, Spicer slammed the media, accusing reporters of knowingly minimizing the attendance at Friday's inauguration before offering a series of statements that were not true.

"This was the largest audience to ever witness an inauguration - period - both in person and around the globe," he said.

Spicer returned to the issue on Monday.

"It's not just about a crowd size," he said. "There is this constant attempt to undermine his credibility and the movement he represents. It's frustrating... it's a little demoralizing."

When pressed about whether tough criticism simply comes with the territory of being president, Spicer insisted Trump was not being treated as well as his predecessors.

'Skype seats'
Spicer has said he wants to buck White House media traditions, and on Monday, he delivered on some of that.

The Associated Press, one of the outlets with a coveted front-row seat, was not given the first question, as is customary.

Instead, the first three reporters called on came from the New York Post, the Christian Broadcasting Network and Fox Business.

The spokesman announced the creation of four "Skype seats" at the briefing, for those journalists living more than 50 miles (80 kilometers) outside Washington.

As the briefing went on, Spicer looked more relaxed, smiled more and tried to build ties with his audience.

"I am going to stay here as long as you want," he said. "I think you guys might want to leave before I do."

In the coming days and months, Spicer's intentions about how he plans to handle the reporters covering Trump - people described by the new president as "some of the most dishonest people on the planet" -- will become more clear.