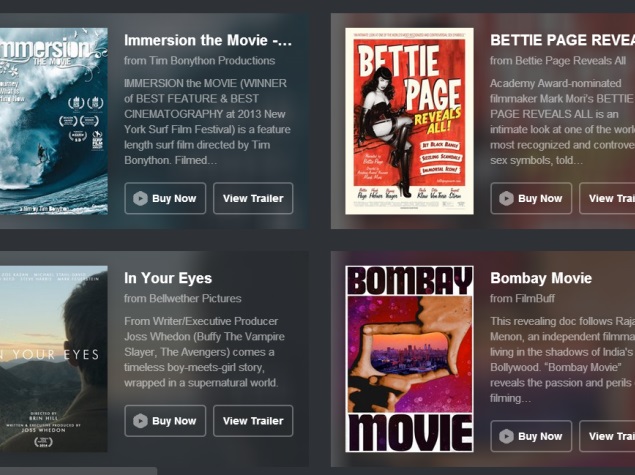 Vimeo, a video-sharing hub popular among independent filmmakers, is embarking on an expansion while shunning the lifeblood of many websites: advertising revenue.

Vimeo bills itself as a higher-minded version of Google's YouTube. The site allows people to post, share and view high-definition video. It has become a favored venue for makers of low-budget films to debut their work, as they hope to gain a following from Vimeo's 22 million registered members and global monthly audience of 149 million.

CEO Kerry Trainor spoke with The Associated Press recently to explain how the IAC/InteractiveCorp subsidiary plans to grow without resorting to industry standard video ads. One way is by charging uploaders who want more storage for high-definition video an annual membership fee. It is also luring content creators to the site with a $10 million investment to help license and promote the sale of their films, for which filmmakers take home the vast majority of revenue.

A: There really isn't anything wrong with pre-roll advertising for other platforms. For a platform like Vimeo, I don't think it's a fit for the environment. The first time you saw HBO and you had ad-free full-length feature films on your television, it was like Whoa. All right. This is something different.'

What we are very interested in is we've experimented now with this service called Vimeo On Demand. We allow (creators) to set their own price. We allow them to set whatever geography they want it distributed in and we said 'We're only going to take 10 percent of the revenue' versus the 30 percent that gets taken from iTunes, by Amazon or the 45 percent that gets taken by YouTube for an ad-based model.

Q: Is there enough content there that people really want to pay for?

A: If we had said five years ago that there's going to be a platform that is so filled with content that it's going to consume literally billions of hours of people's time every month, you'd be like, 'You're crazy.' But there it is and it's called YouTube. There is also that much quality content that reaches interest groups that are willing to pay for it, that isn't being serviced by traditional video mechanisms via television and feature films. I think the answer is absolutely yes.

Q: But that means you have to make sure you're maintaining the quality somehow. It can't just be totally user generated content anymore, can it?

A: The honest answer is: So far, so good. We also do want to proactively bring content to the platform and offer support to creators who we think are doing quality work.

The reality is only a small percentage of those actually get through the keyhole that is traditional Hollywood to get distribution.

Now, a filmmaker has access to be able to deliver an HD quality stream on any device and any country in the world through a service like Vimeo. That's kind of a big deal.

Q: Was there any kind of internal struggle over whether to go advertising versus subscriptions?

A: No, there was not a lot of debate that it would be absolutely worth our while to see if we could build this paid marketplace.

Q: Do you have any direct competitors who are doing exactly what you're doing?

A: On the Web, there are a handful of other players who have introduced transactional capabilities around independent video content. However, none of them have the built-in platform and audience that Vimeo does.

Q: How much has the rise of crowd-funding sites like Kickstarter and Indiegogo helped Vimeo?

Q: Does IAC ever plan to spin Vimeo out in an initial public offering of stock?

The Big Bang Theory among US TV shows banned in China
Updated WhatsApp for Android available for download; brings '1 century' mute and more