Snowden not worthy of being called "hero whistleblower": FBI director 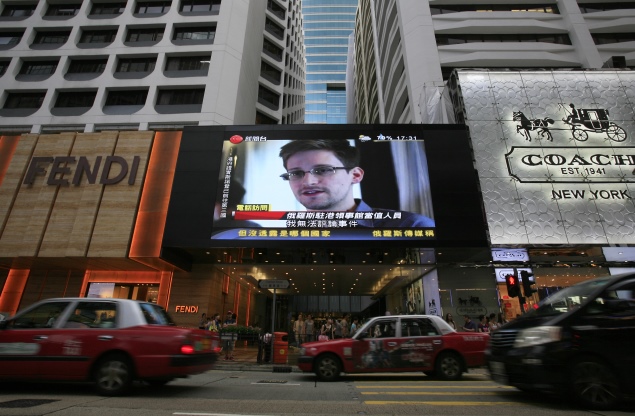 FBI Director James Comey said Thursday he does not consider Edward Snowden worthy of being called a whistleblower or hero, and was baffled by reports granting him the label.

The federal criminal investigation and intelligence chief swiftly dismissed calls for clemency issued by The New York Times and The Guardian newspapers, which said Snowden had done the United States a service by exposing the vast scope of secret digital surveillance run by the National Security Agency.

"I see the government operating the way the founders intended," Comey told a small group of reporters, "so I have trouble applying the whistleblower label to... someone who basically disagrees with the way our government is structured and operates."

Reports based on Snowden's leaked files have revealed a global dragnet run by Washington and its allies in the English-speaking world, scooping up Internet traffic and telephone call logs.

The revelations triggered outrage, including from some US telecoms users and foreign governments targeted in the indiscriminate sweeps, and it has touched off a political and legal debate in the United States.

While Snowden remains in Moscow, protected under a one-year grant of political asylum, US courts have begun examining the legality of the snooping and the White House has carried out an internal review.

Comey did not detail US evidence against Snowden, a former NSA contractor who has been charged under the Espionage Act.

"Whistleblowers are very important," he said. "I struggle to understand how you can apply the hero whistleblower label to that kind of information, so it confuses me."

"Snowden handed terrorists a copy of our country's playbook and now we are paying the price," the House Intelligence Committee's top Democrat Dutch Ruppersberger said.

"We have begun to see terrorists changing their methods because of the leaks and this report indicates that the harm to our country and its citizens will only continue to endure."

The lawmakers' reaction to the report came on the same day President Barack Obama met with US lawmakers, including critics of the NSA surveillance operations, to discuss possible reforms to the programs.

Frustration in a storm of revelations

Comey refused to comment on a European Parliament panel's decision to approve plans to hold a hearing via video-link from Russia with Snowden.

"We have a criminal case and charges are pending against Mr Snowden," the federal police chief simply said.

Republican Representative Mike Rogers, who chairs the House Intelligence Committee, warned that such a hearing would hurt US-European relations.

Comey stressed his "frustration in that sort of a storm that's engulfed all of our public life on this question about intelligence authorities."

The FBI director, who was received Wednesday as Obama finalizes a decision on how to rein in NSA spying sweeps in the wake of the Snowden revelations, made clear his disagreement with the president's review group.

The review panel called on Obama to place new checks on the FBI's use of national security letters to obtain financial and subscriber data, which Comey warned would cause a "delay" in investigations.

"I don't think it captured what I think is one of the most important themes... that the intelligence community is working within lawful bounds," Comey said.

"NSLs is one of the most regular thing the FBI does and I don't see anything that is broken today."

The FBI chief stressed that the NSLs were an important tool to look into people expressing violent views online.

But "being able to do it in a reasonably expeditious way is very important to us," he added.

"I don't know why you'd introduce the changes the review board has mentioned... and why you'd make national security investigations harder in that respect than criminal investigations."

The review panel also urged the Obama administration to require high-level approval and stricter review of possible eavesdropping on foreign leaders, taking into account the potential risks of spying on friendly nations.

Revelations that the NSA had tapped German Chancellor Angela Merkel's cellphone triggered a diplomatic firestorm. The leaders of Brazil and Mexico were also targeted, along with French and Spanish phone records, according to files leaked by Snowden.

Comey separately promised that US security forces would assist and cooperate during the Sochi Winter Olympics in Russia next month, including through a contingent of 12 security forces already in place.
Comments