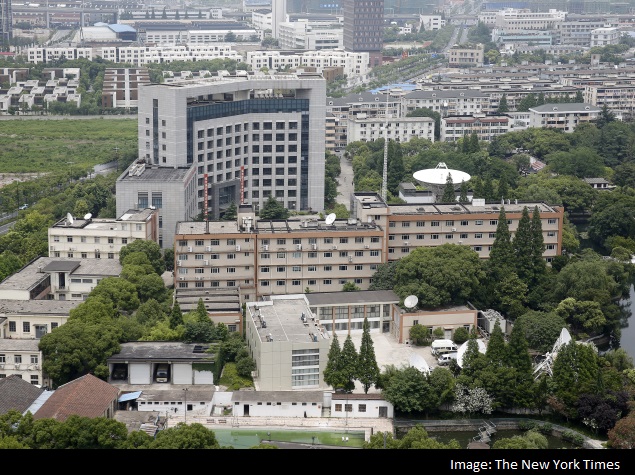 The email attachment looked like a brochure for a yoga studio in Toulouse, France, the center of the European aerospace industry. But once it was opened, it allowed hackers to sidestep their victim's network security and steal closely guarded satellite technology.

The fake yoga brochure was one of many clever come-ons used by a stealth Chinese military unit for hacking, said researchers at CrowdStrike, an Irvine, California, security company. Their targets were the networks of European, American and Japanese government entities, military contractors and research companies in the space and satellite industry, systematically broken into for seven years.

Just weeks after the Justice Department indicted five members of the Chinese army, accusing them of cyber-attacks on U.S. corporations, a new report from CrowdStrike, released Monday, offers more evidence of the breadth and ambition of China's campaign to steal trade and military secrets from foreign victims.

The report, parts of which The New York Times was able to corroborate independently, ties attacks against dozens of public and private sector organizations back to a group of Shanghai-based hackers whom CrowdStrike called Putter Panda because they often targeted golf-playing conference attendees. The National Security Agency and its partners have identified the hackers as Unit 61486, according to interviews with a half-dozen current and former U.S. officials.

Those officials say the NSA and its partners are tracking more than 20 hacking groups in China, more than half of them units of the People's Liberation Army, as they break into public and private sector companies ranging from satellite, drone and nuclear weapon component makers to technology and energy companies and research groups.

Unit 61486, researchers say, in some instances shared computing resources and communicated with members of Unit 61398, the PLA unit whose members were the focus of last month's indictments.

"If you look at all the groups that we track in China, the indictments are just the very tip of the iceberg," said George Kurtz, a co-founder of CrowdStrike.

Knowledge of the attacks, which continue and are being reported for the first time, emerge amid an escalating conflict between the United States and China over cyberespionage.

Tensions had been simmering for years, but grew more pointed last year when a U.S. cyber-security company, Mandiant, identified Unit 61398 as the source of thousands of attacks on foreign companies. The Justice Department's indictment last month named five members of that group and, for the first time, named some of its victims, which included Alcoa, Westinghouse Electric and U.S. Steel Corp.

In response, Chinese officials have denounced the indictments, denied the charges, cited recent revelations that the United States has engaged in its own cyberespionage, and announced retaliatory measures, including new inspection procedures for U.S. technologies, all raising the prospect of a trade war.

The decision to issue indictments against the members of Unit 61398 has proved controversial, even inside the Obama administration. The members of the unit are almost certain never to see the inside of an American courtroom and U.S. officials fear that it could become more difficult to negotiate norms of behavior with China.

The same issue will arise in the case of this newly disclosed unit, whose operations pose as large a threat to U.S. infrastructure as the one whose members have been indicted.

CrowdStrike's forensic investigation revealed that members of Unit 61486 took steps to hide their origins - by using compromised foreign websites to launch their attacks, for instance - but left behind digital traces of their identities and whereabouts. The report does not name the companies that were targeted because of confidentiality agreements CrowdStrike has with clients.

The hackers' tools were developed during working hours in Chinese time zones, researchers say, and Internet records show that in one case hackers used the same I.P. address as members of Unit 61398 to launch their attacks. The use of that address for simultaneous attacks suggests cooperation between Unit 61398 and Unit 61486, said Adam Meyers, CrowdStrike's head of threat intelligence.

CrowdStrike, founded by two former executives of the security software company McAfee, is one of a new generation of computer security companies that specialize in computer forensics.

Rather than reacting to attacks by hackers, the company tries to understand who hackers are and what methods they are using. It has released several reports on global hacking over the past year.

The company's investigation revealed that the group targeted its victims with custom malware disguised as emails containing PDF invitations to aerospace and satellite conferences, job postings, and in one case the brochure for a yoga studio in Toulouse.

Once victims clicked on decoy files, they inadvertently downloaded malicious programs onto their computers. That opened the door for attackers to enter the victim's network, see which other devices and networks their victim was connected to, and eventually steal trade secrets and design schematics for satellite and aerospace technology.

CrowdStrike's researchers said they traced attacks on dozens of the company's clients in the space and satellite industry to the group; the researchers say the list of victims could number in the hundreds, if not thousands.

In some cases, researchers said, attackers slipped up and registered websites used in their assaults under the same email address they used to register personal blog and social media accounts. In one case, an attacker deployed a remote access tool, or RAT, from a Web domain registered to an email address that belonged to a onetime student at the School of Information Security Engineering at Shanghai Jiao Tong University, a top university long suspected of being a state recruiting ground for hackers.

Representatives for Shanghai Jiaotong did not respond to fax messages requesting comment.

In another case, an email address - which popped up repeatedly in Internet records for attack domains - was used to register a personal blog on Sina.com, the Chinese Internet portal, to a 35-year-old who listed the military as his profession. The soldier did not return requests for comment, but in security discussion forums, CrowdStrike's researchers uncovered discussions between that person and two other hackers, whose noms de guerre ClassicWind and Linxder have been linked to members of Unit 61398.

The 35-year-old's Picasa albums show photos of him in military training and celebrating his birthday with friends in military garb, and pictures of his dormitory, where Peoples Liberation Army officer hats are conspicuously in the background. And in his album labeled "office," photos show a tall, white building in Shanghai, surrounded by satellite dishes and dormitory-style residences. Researchers at CrowdStrike believe it is the headquarters for Unit 61486.

Visited by The New York Times, the PLA headquarters - just north of downtown Shanghai in the Zhabei district - were clearly marked as a "military zone." Soldiers guard the entrance to the building, which is surrounded by tall walls topped with wire fencing, a moat, and trees that camouflage military satellite dishes. Viewed from nearby landmarks, the building is full of military personnel and patriotic military slogans.

Military analysts at the Project 2049 Institute, a defense research group in Arlington, Va., suspected that Unit 61486 supported China's space surveillance network and maintained close ties with the Beijing Remote Sensing Research Institute, a state-sponsored organization whose mission is to explore "leading technologies in earth observation and the mechanisms for acquiring and distributing remote sensing information," according to its website. The analysts never presented any evidence.

CrowdStrike believes its report offers the final proof. "We've got the gun, the bullet and the body," Meyers said of evidence connecting attacks on its clients, in the space and satellite sectors, back to Unit 61486.

"The awareness level may be going up," said Kurtz of CrowdStrike. "But the Chinese are not slowing down. They keep plowing away."

First Vine From Space Shows the Never-Setting Sun on the ISS
Sony Reveals Dead Island 2 and The Order: 1886 Release Date at E3 2014