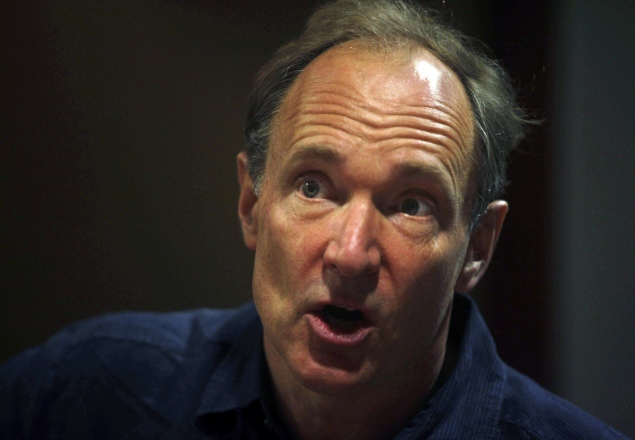 For the European physicists who created the World Wide Web, preserving its history is as elusive as unlocking the mysteries of how the universe began.

The scientists at the European Organization for Nuclear Research, known by its French acronym CERN, are searching for the first Web page. It was at CERN that Tim Berners-Lee invented the Web in 1990 as an unsanctioned project, using a NeXT computer that Apple co-founder Steve Jobs designed in the late 80s during his 12-year exile from the company.

Dan Noyes oversees CERN's website and has taken on the project to uncover the world's first Web page. He says that no matter how much data they sort through, researchers may never make a clear-cut discovery of the original web page because of the nature of how data is shared.

"The concept of the earliest Web page is kind of strange," Noyes said. "It's not like a book. A book exists through time. Data gets overwritten and looped around. To some extent, it is futile."

In April, CERN restored a 1992 copy of the first-ever website that Berners-Lee created to arrange CERN-related information. It was the earliest copy CERN could find at the time, and Noyes promised then to keep looking.

After National Public Radio did a story on the search, a professor at University of North Carolina-Chapel Hill came forward with a 1991 version. Paul Jones met Berners-Lee during the British scientist's visit to the U.S. for a conference in 1991, just a year after Berners-Lee invented the Web. Jones said Berners-Lee shared the page with the professor, who has transferred it from server to server through the years. A version remains on the Internet today at an archive Jones runs, ibiblio.

The page Jones received from Berners-Lee is locked in Jones' NeXT computer, behind a password that has long been forgotten. Forensic computer specialists are trying to extract the information to check time stamps and preserve the original coding used to generate the page.

The Web page preserved by Jones is both familiar and quaint. There are no flashy graphics or video clips. Instead, it is a page of text on a white background with 19 hyperlinks. Some of the links, such as ones leading to information about CERN, have been updated and still work. On the other hand, a link to the phone numbers for CERN staffers is dead.

Noyes said he'll keep searching for earlier versions of the page. Noyes said his project still has to sort through plenty of old disks and other data submitted following NPR's story. He suspects there will be a couple of pages to pop up that were created months before the version Jones has.

The Internet itself dates back to 1969, when computer scientists gathered in a lab at the University of California, Los Angeles to exchange data between two bulky computers. In the early days, the Internet had email, message boards known as Usenet and online communities such as The WELL.

Berners-Lee was looking for ways to control computers remotely at CERN. His innovation was to combine the Internet with another concept that dates to the 1960s: hypertext, which is a way of presenting information nonsequentially. Although he never got the project formally approved, his boss suggested he quietly tinker with it anyway. Berners-Lee began writing the software for the Web in October 1990, got his browser working by mid-November and added editing features in December. He made the program available at CERN by Christmas.

These days, many people see the Internet and the Web as one and the same, even though the Web is just one of the many functions of the Internet. Personal email tends to be conducted over Web-based systems such as Yahoo and Google's Gmail. Web-based message boards have replaced the need for Usenet. Friendster, Myspace and later Facebook emerged as go-to places on the Web for hanging out. People now use the Web to find dates, watch television shows, catch up on the news, pay bills and play games. Many more services are still being invented.

In less than a quarter century, the Web has turned into an easy way to retrieve data on just about any topic from just about any computer in the world with just the click of a link. It has become the equivalent of millions of libraries at the fingertips of anyone with a Web browser and a network connection. The resources have made it far more difficult for authoritarian regimes to keep information from their citizens.

Berners-Lee's office was a few corridors down from Noyes at CERN's headquarters in Geneva. Nearby is a plaque honoring him for his innovation. Noyes recently brought his 14-year-old son and showed it to him.

"For him, it was a concept that doesn't make any sense," Noyes said. "It's no fault of his own, but he can't imagine the world without the Web."

Attempts to reach Berners-Lee through CERN were unsuccessful.

That's part of why Noyes believes it is important to round up the World Wide Web's history. He said it represents the best of how science and free governments can make the world a better place. And the quest for the first Web page reminds him of CERN's main goal - seeking answers about the universe using tools such as the $10 billion Large Hadron Collider, where high-energy beams of protons are sent crashing into each other at incredible speeds.

"We're looking at the origins of the universe. Origins are intrinsically exciting," Noyes said.

Jones takes pride in his small part in Internet history, too. He understands the pull of trying to find the first Web page even if it doesn't make much sense. After all, even the simplest page created by a blogging novice today is richer and has more depth than those Web pages more than two decades ago. He likens it to why millions of people go to Europe to see original paintings of The Scream or the Mona Lisa when they can see replicas with almost no effort at all.

"No matter how perfectly you can reproduce something, like The Scream or the Mona Lisa, we have a fetish for the original," Jones said. "The more you see the derivative, the more you want to see the original."
Comments