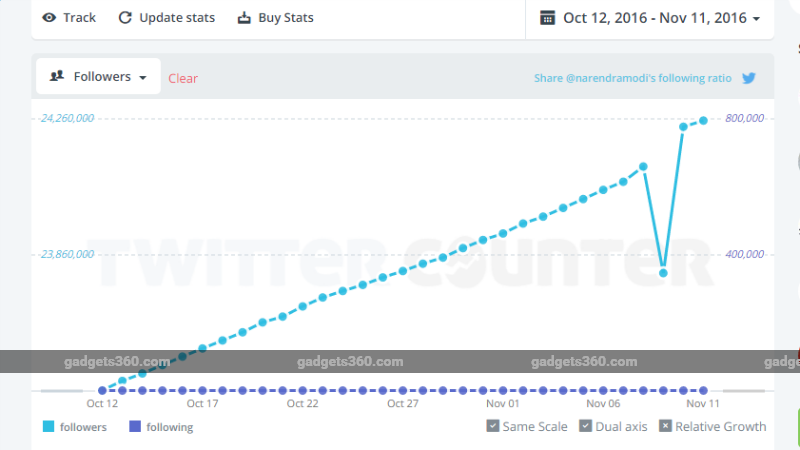 The day after Prime Minister Narendra Modi announced ban on Rs. 500 and Rs. 1,000 notes, he lost over 3 lakh followers him on Twitter, according to a popular Twitter analytics website.

Twittercounter notes that PM Modi's Twitter account @NarendraModi had a net loss of 3,13,312 Twitter followers on Wednesday, the day after the Prime Minister made a speech demonetising Rs. 500 and Rs. 1,000 currency notes. Note that this is the net change in Twitter followers, taking into account the number of users who followed and unfollowed the account on the day.

However, Prime Minister Narendra Modi's account had a net gain of 4.3 lakh Twitter followers the following day, well above the average of 20,000 to 25,000 new followers that the account's data shows in the days leading up to Wednesday.

As part of sweeping steps to check black money, Prime Minister Modi on November 8 announced that Rs. 500 and Rs. 1,000 currency notes will cease to be legal tender from November 9. The Prime Minister said in a televised address that all the 500 and 1,000 denomination notes can be deposited in banks and post offices between November 10 and December 30.

India’s nascent digital payments industry has been lauded the move, with many hoping that this step will lead the country into an era when cash is not as dominant as it has been so far.

E-commerce companies like Amazon, Flipkart, and Snapdeal have suspended cash on delivery option for orders placed on their platforms soon after the announcement; Snapdeal even offered a 10 percent discount on online payments. FreeCharge announced the launch of a Wallet on Delivery service, while Paytm and MobiKwik said they have similar plans.

There is a lot of uncertainty around the new Rs. 500 and Rs. 2,000 currency notes; in fact, Finance Minister Arun Jaitley had to debunk the rumour about nano-GPS tracking chips in the Rs. 2,000 notes, something that had been doing the rounds on WhatApp.

Google Won't Build an Ad-Blocker Into Chrome, Wants to Fix Ads Instead
Online Streaming the New Mantra for Disney as Ratings Dip