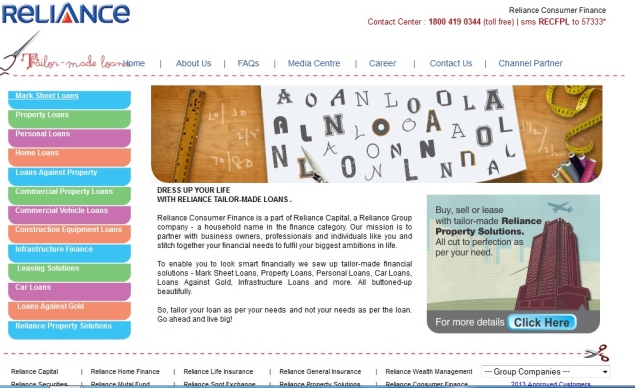 Reliance Capital has filed a criminal complaint with the city police against a website accusing it of misusing its brand name and cheating people.

The Anil Ambani led firm has accused the creator of the website of cheating, impersonation and phishing, online extortion and misappropriation.

Police have launched a probe in the matter.

According to the complaint, the owner and creator of the fake website has been using the Reliance brand and cheating customers and maligning the company's reputation.

The complaint, signed by Ganesh Aparaj, Zonal Manager Risk Containment Unit, was handed over to the Cyber Crime Investigation Cell of the city police on May 29.

The company learnt about the website after receiving complaints from consumers who were cheated with offer of loans on easy terms.

Police said that they have received the complaint and said a probe was on to ascertain the creator of the website.

"The fake website resembles the website of the group company Reliance Commercial Finance and contains all the database, information, names of our company as well as our sister and group entities," the complaint said.

"The fake website operators have contacted various people including existing customers of our company for submitting confidential information such as bank details, password of bank account numbers and other related information," it alleged.

"We urge customers not to fall prey to any person or entity making fraudulent offers of lucrative loans or gains.

Besides, we are also alerting customers through SMS and emails against these frauds," Reliance Commercial Finance CEO K V Srinivasan said in a statement.

The company said that it suspected that the money and information collected through the fake and fictitious website may be used for organised crime.

According to the complaint, the fake website also has a toll free number. On contacting, the website asks the consumers to deposit money in a bank account after which sanction letters will be issued.
Comments