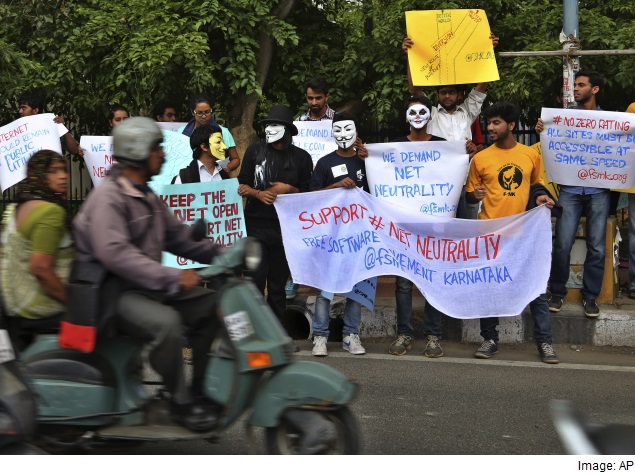 A government panel on net neutrality has proposed to regulate domestic calls made using Internet-based calling applications such as Skype, WhatsApp and Viber at par with phone call services offered by telecom operators.

The panel has opposed projects like Facebook's Internet.org, which allow access to certain websites without mobile data charges, while suggesting that similar plans such as Airtel Zero be allowed with prior clearance from Telecom Regulatory Authority of India (Trai).

The Committee is chaired by DoT Advsior for Technology A K Bhargava and members in the panel include A K Mittal, V Umashankar, Shashi Ranjan Kumar, G Narendra Nath and R M Agarwal.

Net neutrality implies that equal treatment be accorded to all Internet traffic and no priority be given to an entity or company based on payment to content or service providers such as telecom companies, which is seen as discriminatory.

The net neutrality debate flared up in India after telecom operator Airtel launched a platform, Airtel Zero, which would allow free access of some websites on its network. However, the companies were asked to pay Airtel for joining the platform.

The panel discussed Facebook's Internet.org and said that until April 2015, Internet.org users could have free access for only a few websites, and Facebook's role as gatekeeper in determining what websites were on that list was seen as violating Net neutrality.

The panel said that "collaborations between telecom operators and content providers that enable such gate-keeping role to be played by any entity should be actively discouraged".

At the same time, the panel approved allowing zero rating platform after telecom operators compared it with a toll-free number. It said there is a multitude of possibilities in designing tariff plans and everything cannot be validated in advance on parameters of Net neutrality.

Under ex-ante determination, the panel has proposed telecom operators to follow current practice of filing tariffs before Trai and the regulator should carefully vet it on scale of net neutrality before giving its nod.

In line with demand from telecom operators, the panel has recommended that OTT players should be brought under regulation to comply with national security norms like telecom operators in the country do.

"National security is paramount, regardless of treatment of Net neutrality. The measures to ensure compliance of security related requirements from OTT service providers need to be worked out through inter-ministerial consultations," the report added.

Speaking about messaging services also offered by some VoIP apps, such as WhatsApp and Skype, the report added, "For these application services, there is no case for prescribing regulatory oversight similar to conventional communication services.

"The existence of a regulatory arbitrage, in addition to the pricing arbitrage, adds a degree of complexity that requires a graduated and calibrated public policy response to bring about a level playing field."

The panel is of the view that "specific OTT communication services dealing in messaging should not be interfered with through regulatory instruments".

The panel said that in the case of Internet-based calls, there exists a regulatory arbitrage, wherein such services bypass the existing licensing and regulatory regime, creating a non-level playing field between telecom operators and OTT providers both competing for the same service provision.

The committee has invited suggestions and comments beginning Thursday till August 15, 2015.

The pricing difference is around 12.5 times in the case of a voice call and 16 times for messages between services offered by telecom operators and OTT players, data put together by Trai showed.

For a one-minute phone call, a customer is charged around Rs. 0.50, but a call made using Internet costs Rs. 0.04 to customer, according to Trai calculations.

Telecom operators contend that they are under financial distress and there should be a level-playing field between them and OTT players as the latter are eating into their revenues.

They added that "a non-level playing field can adversely impact investments telecom operators are making".

Indian telecom operators have said their cumulative investments in the sector stand at approximately Rs. 7,50,000 crores and further investments of around Rs. 5,00,000 crores will be required in the next five years to meet demand.

OTT players, on their part, have said their service has led to a boom in Internet business, which is providing "robust growth to the business of telecom operators"