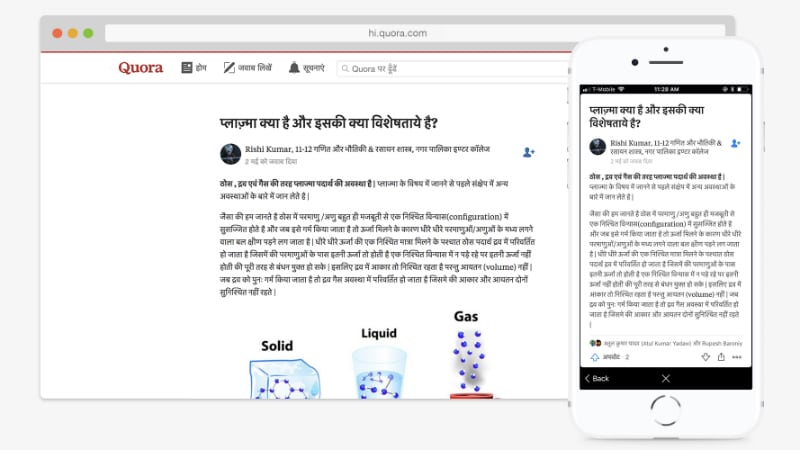 Aiming to expand its user base in India, popular question-and-answer platform Quora on Thursday launched in Hindi and promised the roll out of the platform in several other Indian vernacular languages soon.

"The launch of Quora Hindi is an expansion of our mission to share knowledge. We will soon launch the platform in other Indian languages within a few months," Gautam Shewakramani, India Country Manager at Quora, told IANS.

"We are preparing the launch of the platform in several languages and the next launch may be in more than one language," Shewakramani said.

Quora was founded in 2009 by Adam D'Angelo, a former Chief Technology Officer at Facebook.

Besides English, the platform is available in Spanish, French, German, Italian, Japanese, and starting May 2018 Indonesian too.

"There is currently no plan to monetise Quora Hindi. The focus now is on maintaining quality and credibility of information shared on the platform," Shewakramani said.

"The idea of knowledge-sharing has a universal appeal. India fits well into our mission as this country has always valued knowledge and shared them with the greater world community," he added.

Quora launched a beta version in Hindi to a small group of people in April 2018 before making it available to all.

"Quora has been popular in India for many years, and now that we are opening Quora up in Hindi we hope to have even more participation from people in India. I've been excited to see the engagement throughout the beta of Quora in Hindi," Shewakramani said.

"During the past few months, we've already seen thoughtful answers on diverse subjects, such as the relevance of Ram and Sita to couples today, the best places to visit in Delhi, advice for people traveling outside India who do not speak English, gender equality at home, among many others," he added.

Since its launch in English in 2010, Quora has attracted leading personalities and experts who have answered all kinds of questions asked by people on Quora, and shared knowledge that was not available before.

Telegram Says Apple Has Prevented It From Updating Since April
Xiaomi, Bound for IPO, Woos Fans (And Investors) at Glitzy Launch