Popular Google Doodle Games are meant to help 'stay and play at home' during coronavirus pandemic. Wednesday's doodle is a simple Halloween game. 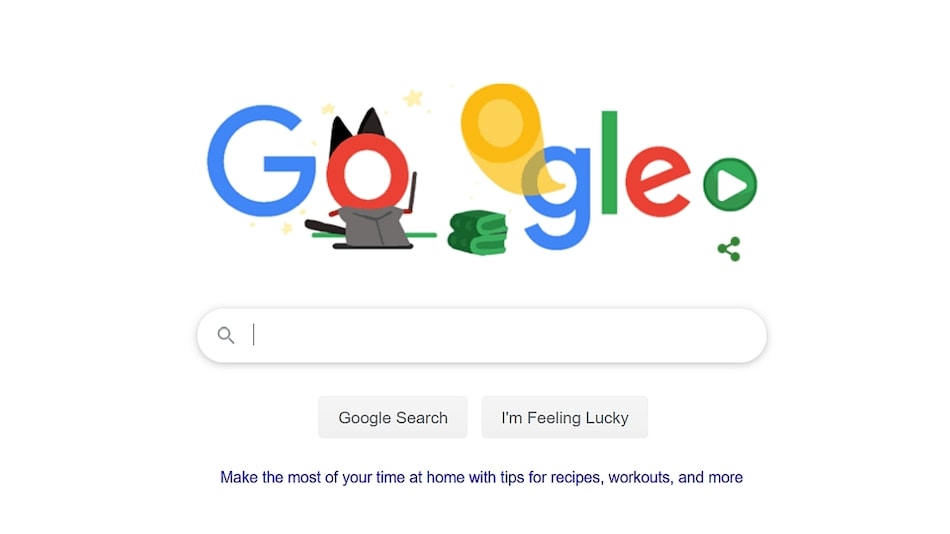 Popular Google Doodle Games series is an initiative by Google to promote gaming while staying indoors during the coronavirus lockdown. It started with a kids coding game called Coding for Carrots on April 27 and now, the latest doodle is a Halloween game that was first published in 2016. The newest of the popular Google Doodle games \is called Magic Cat Academy and originally published on October 31, 2016 to celebrate Halloween. It is a simple and fun game with multiple levels and marks the 8th game in this ongoing series of 10 games by the search giant.

The Halloween game for Wednesday, May 6, changes the ‘Google' banner in accordance with the theme. The first ‘O' is dressed as a cat holding a wand while the second ‘O' is animated to be a ghost. Hovering over the animated Google banner shows “Stay and Play at Home with Popular Past Google Doodles: Halloween (2016)”

To play the Magic Cat Academy game, simply click on the animated Google banner and it show you search results for “popular Google Doodle games”. You will see the game show up with a ‘Play' button, click on it and you will see a short intro video to the game after which, it will teach you how to play. The mechanics of the Magic Cat Academy are simple, you have to draw the symbol that appears on top of the ghost with your cursor to defeat the ghost. And of course, it gets harder as you progress. As with previous popular Google Doodle games, the search results page that contains the Halloween 2016 Google doodle game shows all the games released so far, in a 'From the Google doodle archive' carousel. Two more are due to arrive.

As we mentioned the search results page also shows you all the games, out of 10, that have been revealed. As mentioned earlier, eight games have been revealed till now starting from April 27. The first game was Coding for Carrots, that was originally published in 2017 to celebrate 50 years of a coding language for kids called Logo. It has players drag and drop simple codes in the correct order to make their character, a rabbit, collect all the carrots.

Next, Google published the Cricket game from 2017 on April 28 that originally celebrated the start of ICC Champions Trophy. The game has you play as a cricket against a team of snails. As the batsman, all you have to do is click on the yellow swing button at the right time as the snail throws the ball.

On April 29, the search giant published a game called Fischinger from 2017 that was originally celebrated the 117th birthday of filmmaker and visual artist Oskar Fischinger. The game has been inspired from one of his quotes “Music is not limited to the world of sound. There exists a music of the visual world” from 1951. Fischinger (the game) shows you a large grid of diamond symbols and you can click on each individual diamond to make music. You can choose from four different instruments and click the grid in any order to make music, along with a visual representation for the sound. There are also options for adding effects like ‘delay', bitcrush', and ‘phaser'. You can change the tempo, use presets, and experiment with a few other options to create music as you like.

On April 30 came Rockmore. Originally published in 2016, Rockmore celebrated the 105th birthday of Clara Rockmore who was the most well-known Theremin performer. The game called Rockmore first gives you a tutorial on how to play the virtual Theremin and then let's you perform with a larger number of notes. You can also change the key, scale, octave, and waveform of the instrument.

The series continued on May 1 with Garden Gnomes, originally from 2018. At the time, it celebrated German Garden Day that pays homage to the creation and tradition of placing gnome figures in gardens to protect and decorate them. The game starts with an intro to the tradition and has you catapult different gnomes with different abilities as far as you can.

Then, on May 4, a game called Scoville was published. It was first made into a doodle in 2016 and at the time celebrated 151st birthday of Wilbur Scoville who was a chemist, award-winning researcher, professor of pharmacology, and the inventor of the scale to measure a pepper's “heat”. The game has you throw ice cream scoops at different pepper to counter the ‘heat' by clicking at the right time at the centre of a fast moving meter.

That was followed by Lotería on May 5. Lotería was first published in 2019 as a celebration of the traditional Mexican card game by the same name. The doodle is a virtual version of Lotería where you have to place the beans on a matching card. It is a multi-player game and required the players to click on ‘Lotería' when they have a complete row of beans on the board.

History of the Google Doodle Halloween 2016 game, and its reach

The Halloween game was first published by Google on October 31, 2016 as a celebration for Halloween. In its post describing Wednesday's doodle, Google shared that the doodle is available in most of Europe (including Russia, the UK, and Croatia), Australia, New Zealand, India, Pakistan, parts of Africa, the US, Brazil, and the Philippines.

Google Doodle's reach across the globe

This initiative started on April 27 with the intention of entertaining people while they stay at home to curb the spread of coronavirus. Google says, “As COVID-19 continues to impact communities around the world, people and families everywhere are spending more time at home. In light of this, we're launching a throwback Doodle series looking back at some of our popular interactive Google Doodle games!”

Wednesday's Halloween game is the eighth game in the series and two more games for Thursday and Friday are yet to be revealed.

Airbnb to Lay Off Up to 1,900 Employees in Effort to Ride Out COVID-19 Pandemic
Twitter Tests Telling Users Their Tweet Replies May Be Offensive