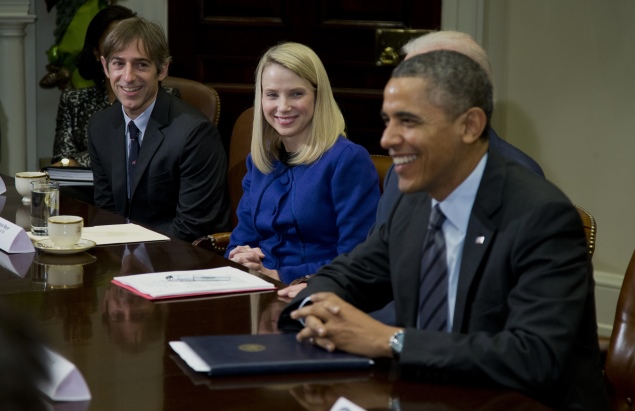 Technology company executives pressed President Barack Obama on Tuesday to rein in the U.S. government's electronic spying after a court dealt a blow to the administration's surveillance practices.

The session came as Obama and his national security team decide what recommendations to adopt from an outside panel's review on constraining the activities of the National Security Agency without compromising U.S. national security.

The White House had trumpeted the meeting as a chance to talk up progress made in repairing the government's healthcare website after its botched rollout generated a political firestorm and sent Obama's job approval rating tumbling.

But in a brief statement released after the session, the tech companies focused solely on government surveillance, not healthcare.

"We appreciated the opportunity to share directly with the president our principles on government surveillance that we released last week and we urge him to move aggressively on reform," the technology companies said in their statement.

The NSA practices essentially made the companies partners in sweeping government surveillance efforts against private citizens.

Separately, Obama's nominee to be chief legal counsel to the Central Intelligence Agency said on Tuesday she disagreed with a judge's ruling that the NSA surveillance programs are likely unlawful, citing a 1979 case often used as precedent in privacy cases.

"I have a different view about the Fourth Amendment," nominee Caroline Krass said at a Senate hearing. "I think that under Smith v. Maryland, which I still consider to be good law, there is not a reasonable expectation of privacy in telephony metadata."

A federal judge ruled on Monday that the U.S. government's gathering of Americans' phone records is likely unlawful.

Protect privacy
Eight tech companies launched a campaign a week ago asking for governments to reform surveillance practices to protect privacy, writing an open letter to Obama and Congress on the issue.

A representative from one of the companies, who asked not to be identified, said the White House had wanted to meet to discuss the HealthCare.gov website. The invitations were sent before the White House received the tech companies' letter.

The main draw for the tech companies was the opportunity to press the case on the need for more transparency on the bulk data collected.

A senior administration official, speaking on condition of anonymity, described the meeting as constructive and "not at all contentious." Obama and a clutch of his top advisers - including national security adviser Susan Rice and counterterrorism aide Lisa Monaco - listened closely to the company executives' ideas and concerns, the official added.

Documents provided by Snowden showed that a U.S. surveillance court had secretly approved the collection of raw daily phone records in the United States. Other revelations have included reports that U.S. monitoring extended to some foreign leaders including German Chancellor Angela Merkel.

Obama is due to announce next month what steps he will take to roll back the sweeping surveillance practices.

The White House said after the tech meeting that the president and the executives discussed the national security and economic impacts of unauthorized intelligence disclosures as Obama nears completion on his intelligence review.

"The president made clear his belief in an open, free and innovative Internet and listened to the group's concerns and recommendations, and made clear that we will consider their input as well as the input of other outside stakeholders as we finalize our review of signals-intelligence programs," the White House said in a statement.

Google and HP recall Chromebook 11 chargers due to hazard issues in some units
Amazon to launch Kindle smartphones in Q1 2014: Report