NYTimes to sell About.com for $270 million 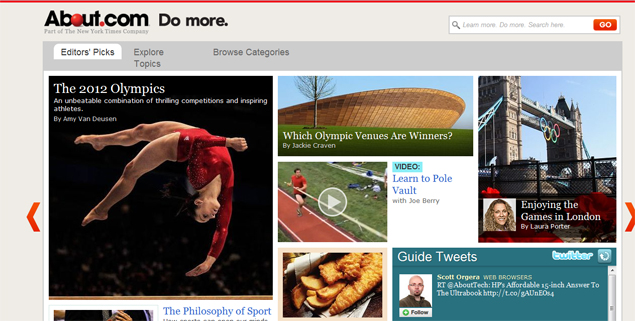 The New York Times Co. has agreed to sell its troubled online information service, About.com, to rival Answers.com for $270 million, or two-thirds what the Times paid for it in 2005, according to a person familiar with the matter.

About.com provides information on a wide variety of topics and also operates ConsumerSearch.com and Calorie-Count.com. Content is written by paid experts known as guides. Answers.com, by contrast, relies on users to answer questions.

The Times purchased About.com for roughly $410 million. It has suffered in the past year because of a change in the way Google handles search results. That change made About.com content harder to find.

The sale was reported earlier by AllThingsD, a website affiliated with The Wall Street Journal. The Times company confirmed discussions of a sale but said no definitive agreement has been reached. The person who said there was a deal told The Associated Press that it was still awaiting financing. As a result, the person was not authorized to speak publicly.

After the morning AllThingsD report came out, Times shares rose 49 cents, or 6.1 percent, to close Wednesday at $8.57.

Answers.com's plans for About were not known. Messages left Wednesday with Answers.com and its two major investors, Summit Partners and TA Associates, were not returned. Answers.com is based in St. Louis.

In the April-June quarter, the Times took a $126 million after-tax charge against earnings to reflect the declining value of the About.com business. That pushed the Times to an overall loss.

Times Chairman and CEO Arthur Sulzberger Jr. said last month when the company reported earnings that he was upbeat over About.com's prospects. "The About Group continues to execute on its turnaround strategy, and we expect it to be on track to post continued meaningful improvement in the second half of the year," he said.