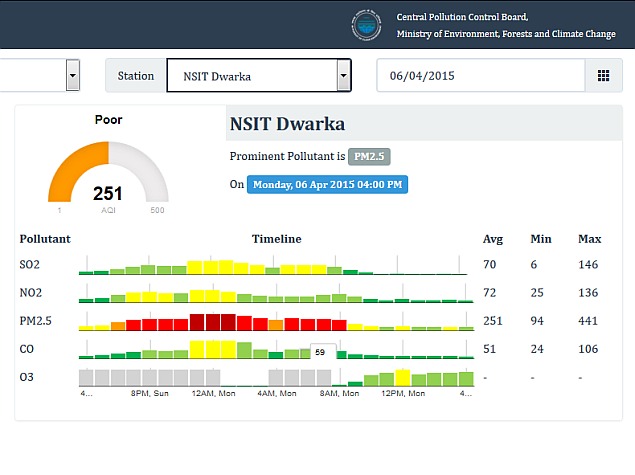 People across India can now track the quality of air they breathe with the click of a button!

Prime Minister Narendra Modi on Monday launched a National Air Quality Index (AQI), which will monitor the quality of air in major urban centres across the country on a real-time basis.

The AQI was launched at a two-day conference of state environment ministers in New Delhi, where union Environment Minister Prakash Javadekar was also present.

Available on the ministry's website, the index will provide the current status of the level of pollution in a given city, with this being depicted through a colour-coded system indicating air quality, ranging from dark green as "good" to maroon as "severe".

Developed by the Central Pollution Control Board in consultation with the Indian Institute of Technology, Kanpur and a group of experts, the index will also alert people about the possible health impacts of each of its six categories.

Launched in phases, the first leg would cover only 10 cities with plans of expansion to other cities in subsequent phases.

In total, about 46 cities with million plus population and 20 state capitals have been proposed to be covered, said an official statement.

"The AQI may prove to be a major initiative for improving air quality in urban areas, as it would enhance public awareness and involvement, and would create a competitive environment among cities to take steps for air pollution mitigation," it said.