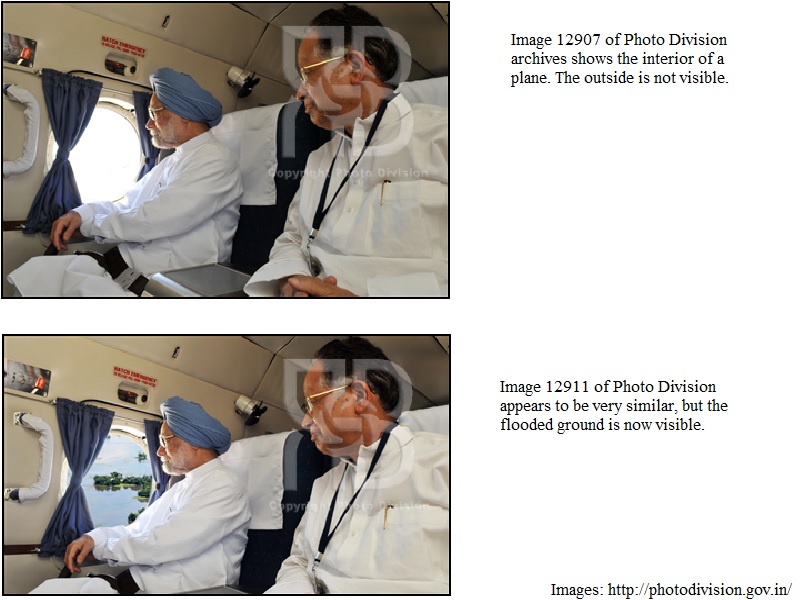 On Friday an image of Prime Minister Narendra Modi, released by the PIB, caused a storm in a teacup as people on social media observed that it had clearly been edited. A statement issued by the PIB later clarified that this was done in error, and was regrettable. However, while the statement calls it an error of judgement that led to images being merged, it looks like this might actually be a fairly standard practice, as an image from the PIB archive (shown above), appears to be an edited image of former Prime Minister Manmohan Singh.

The images shown above are available on the Photo Division's website, and image 12907 and image 2911 together suggest that the second image has been edited (or merged) to show the flood-hit area more clearly.

As it turns out, this is not the only example of this "merging" either - reportedly, this kind of editing has long been the norm.

"We have seen the pictures of photo division during the aerial surveys of former PMs in the last many years. Several pictures, including those that include Manmohan Singh, were altered to include two pictures or to show a closer view of the ground, water level and the extent of destruction. This is only to give a more realistic view of the ground situation. To call it Photoshop (altering the photo by using the Photoshop editing software) is not right," a PIB official told ET.

Another image of former PM Dr. Manmohan Singh also appears to be merged, and Gadgets 360 has written to the PIB for the original versions of all the images mentioned in this story, and to seek comment about how common this practice is. We will update this article as and when the PIB responds.