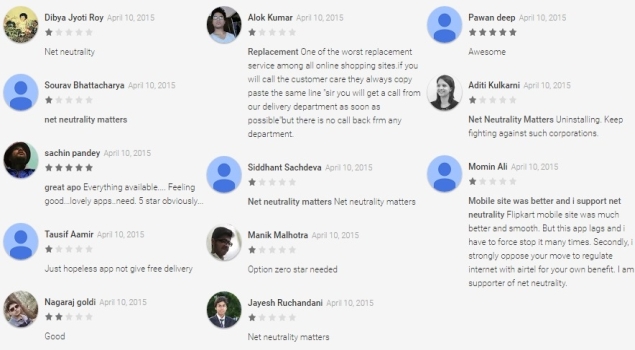 The announcement of Airtel Zero - a platform where businesses can pay Airtel to offer users free data access to their apps - has turned many people off Flipkart. The online retailer was reputedly one of the first partners for Airtel Zero, and Flipkart CEO Sachin Bansal has been one of the few prominent persons to speak out in support of zero-rating plans like Airtel Zero.

In retaliation, many users have taken to giving one-star ratings to Flipkart's apps on Android and iOS. To make sure that the message is not lost, people also mention net neutrality in their reviews.

The issue of net neutrality has been gaining visibility in India in the last few months, starting when Airtel first announced a special data rate for Skype calls. The company back-pedalled on this after user outrage, saying it would instead wait for a Telecom Regulatory Authority of India (Trai) consultation paper on regulation of apps before making any plans.

Since then, the first draft of the Trai paper was released, seeking views on the framework. The draft had several issues, from vague language to discussing issues unrelated to telecom.

The Trai draft appears to favour telcos over consumers, and this has caused people to be much more sensitive to issues around net neutrality than before. In this context, the backlash against Flipkart and Airtel Zero seems inevitable, and the timing of the announcement before Trai's final regulations is questionable, at best.