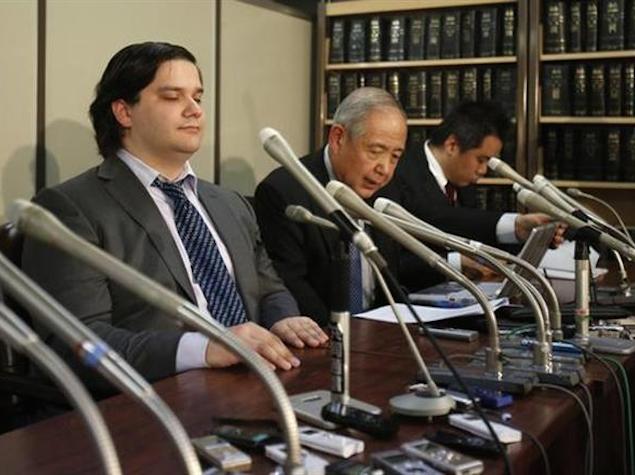 Mt. Gox, once the world's biggest Bitcoin exchange, filed for bankruptcy protection in Japan on Friday, saying it may have lost nearly half a billion dollars worth of the virtual coins due to hacking into its faulty computer system.

The collapse caps a tumultuous few weeks in which the company has remained virtually silent after halting trades of the crypto-currency, shaking the nascent but burgeoning Bitcoin community.

Wearing a suit instead of his customary T-shirt, Mt. Gox's French CEO Mark Karpeles bowed in contrition and apologised in Japanese at a news conference at the Tokyo District Court, blaming his firm's collapse on a "weakness in our system", but predicting that Bitcoin would continue to grow.

"First of all, I'm very sorry," he said. "The Bitcoin industry is healthy and it is growing. It will continue, and reducing the impact is the most important point."

Angry investors have been seeking answers for what happened to their holdings of cash and Bitcoins on the unregulated Tokyo-based exchange.

Gregory Greene, who estimated his Bitcoin stake at $25,000, filed a lawsuit in the U.S. District Court in Chicago late on Thursday, saying Mt. Gox had failed "to provide its users with the level of security protection for which they paid.

Baker & McKenzie, a Chicago-based law firm that represents Mt. Gox, declined to comment. It is not yet clear if the firm is representing the exchange in this lawsuit.

Mt. Gox said the exchange, used overwhelmingly by foreigners, had lost 750,000 of its users' Bitcoins and 100,000 of its own. At the current Bitcoin price of about $565, that would total some $480 million - representing about 7 percent of the estimated global total of Bitcoins.

"This may be telling for the level of traceability of the transactions. Bitcoin has been telling us that it is more traceable than cash. The question is, how much more and is there the potential for real recourse in the case of theft," said Moshe Cohen, assistant professor at Columbia Business School in New York.

Mt. Gox said there was a discrepancy of 2.8 billion yen in its bank accounts when it checked on Monday. Junko Suetomi, a lawyer with Baker & MacKenzie, said she could not comment on the balances of foreign bank accounts held by the company.

Problem with exchange, not Bitcoin
Many Bitcoin market participants have said Mt. Gox's problems were specific to the company and were caused by what they said was a lax attitude by Karpeles, while Bitcoin itself - free of any central bank control - was still a noble venture.

"If we could agree on legal regulation, we should let (Bitcoin and regulators) co-exist," said Keiichi Hida, a Bitcoin investor and member of the Japan Digital Money Association. He lost about 100,000 yen worth of Bitcoins, but seemed unconcerned as he became interested in the virtual currency as a form of "study".

"We should make it a national project to have Bitcoin used nationwide at the time of the 2020 Tokyo Olympics," he said.

Mt. Gox shut its website on Tuesday after freezing withdrawals earlier this month in the wake of a series of technical difficulties.

The exchange had liabilities of 6.5 billion yen, dwarfing its total assets of 3.84 billion yen, the company said. It had 127,000 creditors in bankruptcy, just over 1,000 of whom are Japanese.

The company and Karpeles have said little in the days before Friday's court filing, which is similar to Chapter 11 bankruptcy in the United States, except that they were working with others to resolve their problems.

Another lawyer, Akio Shinomiya at Yodoyabashi and Yamagami, said Mt. Gox wanted to file a criminal complaint against what he said was a hacking attack, but had no specific means of doing so.

"Bitcoin has always been volatile and speculative, said Bitcoin user Ken Shishido, who had about a tenth of his Bitcoin holdings at Mt. Gox, but has seen the rest of his Bitcoins soar tenfold since he began trading 18 months ago.

"It's too bad that this happened, but we have to let it go. And then we'll buy more."

Fortress Investment Group became one of the first big investors to say it had lost money investing in Bitcoin. In a regulatory filing with the U.S. Securities and Exchange Commission, the company said it incurred $3.7 million in unrealized losses in 2013.