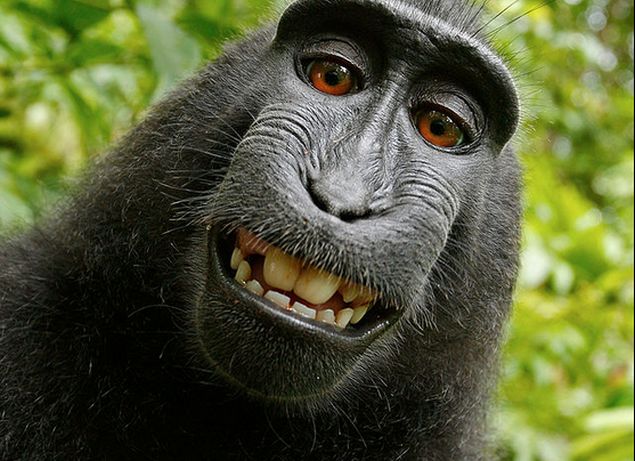 The US Copyright Office has confirmed Wikimedia's conclusion that a monkey - or any other animal - that takes a selfie does not own the copyright of the photo, and nor does the photographer who owns the camera. The selfie thus becomes unprotected intellectual property.

A selfie taken by a black macaque on the Indonesian island of Sulawesi three years back has become a tug of war between Wikipedia and the photographer who claims he is the owner of the selfie.

Wikimedia had refused to remove the famous selfie from Wikipedia, saying neither the photographer or the monkey owned the copyright, making the image available in public domain.

In an update to copyright regulations and practices published this week, the US regulator spelled out examples of works that are not eligible for protection.

These include "a photograph taken by a monkey" and "a mural painted by an elephant", says a report in National Journal.

"The Office will not register works produced by nature, animals, or plants. Likewise, the Office cannot register a work purportedly created by divine or supernatural beings, although the Office may register a work where the application or the deposit copy state that the work was inspired by a divine spirit," the US Copyright Office said in a draft report (via Ars Technica ).

Photographer David Slater was clicking photos of crested black macaques in 2011 when one of the endangered monkeys hijacked his camera and snapped hundreds of pictures.

Among those, there were some stunning images, including a selfie of the macaque that made headlines.

Slater argues that Wikimedia's defence is based on a technicality, and that there is "a lot more to copyright than who pushes the trigger on the camera".

"I own the photo but because the monkey pressed the trigger and took the photo, they're claiming that the monkey owns the copyright," he said.