Microsoft Word on the Web Gets a Voice to Text Transcribe Feature to Counter Google Docs, Otter.ai

Transcribe in Word feature is available for free to all Microsoft 365 subscribers. 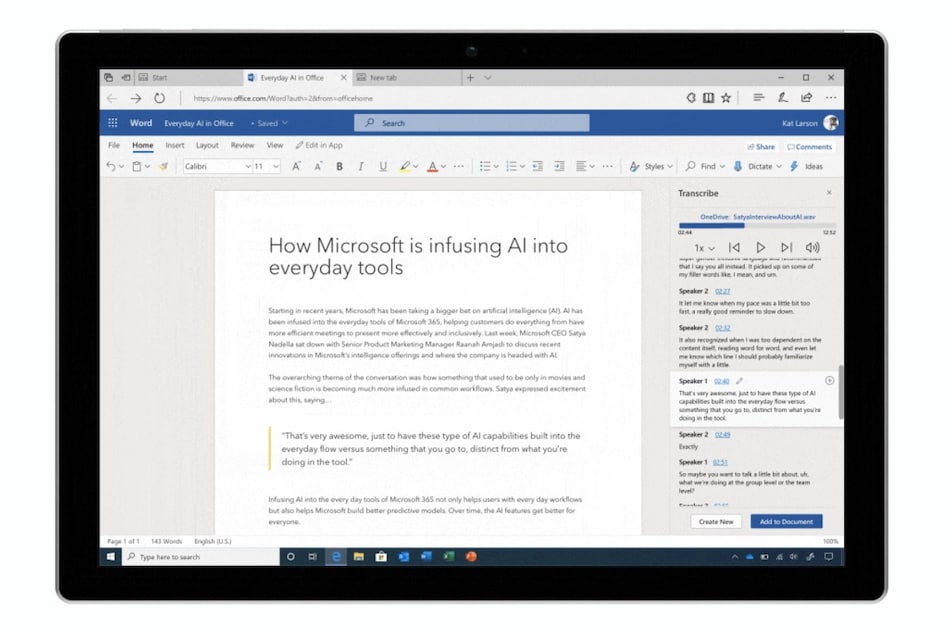 Microsoft Word on the Web has added an audio transcription feature that lets you easily generate a transcript of your previously recorded conversations or transcribe an ongoing conversation in real time. Called Transcribe in Word, the new feature uses Azure Cognitive Services to help provide transcriptions directly in the online version of Microsoft Word. It is capable of detecting different speakers as well as providing you with time-stamped audio. Microsoft targets the Transcribe feature at reporters conducting interviews, students as well as researchers recording focus group sessions, and entrepreneurs recording informal discussions.

Transcribe in Word is available for free to all Microsoft 365 subscribers and is currently accessible through Microsoft Word for the Web in the new Microsoft Edge or Chrome browsers. However, Microsoft has plans to bring it to the Word for Android and iOS apps by the end of this year.

You can begin with Transcribe in Word by selecting the Transcribe option after clicking the drop-down button next to the Dictate icon in the online version of Microsoft Word. This will bring a sidebar that lets you generate a transcript by uploading an audio file in WAV, MP4, or MP3 format or start recording a conversation directly within the word processor. For uploaded recordings, there is a limit of five hours or 300 minutes per month — with each uploaded recording of up to 200MB in size. This is, however, not the case if you're transcribing a conversation using the built-in audio recording option.

Microsoft uses artificial intelligence (AI) through Azure Cognitive Services to enable transcriptions in the Word. However, it isn't like a regular speech recognition program and is capable of detecting multiple speakers in a conversation. Users are also provided with the option to revisit parts of their recording through time-stamped audio and the option to manually edit the transcript is in place to help make changes within Microsoft Word.

Once you're done with the transcription, you can add the transcribed text to your Word document by clicking Add all to document button from the Transcribe sidebar.

Microsoft has initially enabled Transcribe in Word in English (EN-US), though considering the company's success in enabling experiences in other languages, it would support some other languages in the coming future.

The arrival of Transcribe in Word could help Microsoft attract reporters, students, and researchers, who actively look for a perfect solution to transcribe conversations. This is likely to give a tough fight to Google Docs, which has a domination in the world of online word processors. Also, with transcription support on board for Microsoft 365 subscribers, the Redmond company has made things difficult for companies like Otter.ai that are so far popular in the field of generating written transcriptions using AI and machine learning algorithms.

Notably, Transcribe in Word isn't the first move by Microsoft to enable transcription for users. The company has, in fact, been working on its speech-to-text developments for quite some time. It showcased the initial model of an advanced speech recognition using Azure Speech Services and a conical-shaped hardware back in 2018 and announced Conversation Transcription Service last year as its device-agnostic model for real-time conversations in meetings.

Alongside bringing transcription support, Microsoft has uplifted its Dictate feature on the Word for the Web with voice commands. This new addition lets users pass commands like “start list” or “bold last sentence” to make changes in their documents, without using the keyboard. You can also use voice commands to add symbols by saying “ampersand” or “percentage sign” or add punctuation marks like ellipses by naturally calling them “dot dot dot”. Further, voice commands can be used to add emojis to your message.

Dictate with voice commands can initially be accessed using Word for the Web and Office mobile apps. However, Microsoft is bringing voice commands to Word desktop and Word for Mac apps towards the end of the year for all Microsoft 365 subscribers.