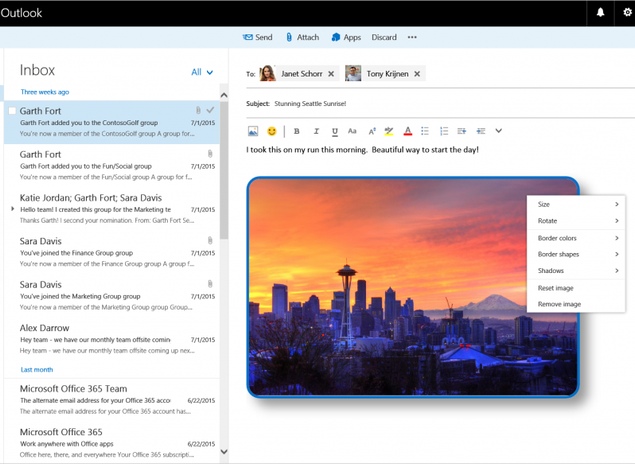 Microsoft is rebranding the Outlook Web App (OWA), the Web version of Outlook in Office 365 suite, to Outlook on the Web, it announced late Tuesday. In addition to the rebranding, the email and calendar client is also getting a visual makeover which, the company says, will help users become more efficient and also help them better manage their calendars.

Among the new additions is the new "Action toolbar" which aims to provide users quick access to the most frequently used commands regardless of their ongoing work, and also help them quickly and more intuitively check emails.

Another new feature called 'Sweep' provides users with a "simple set of actions" to manage emails from certain people. The company says that this will help users manage reoccuring emails like newsletters, coupons, and other promotions from a specific sender, and let them decide how many such emails they want from that person - in addition users also get the option to completely delete all emails from a specific sender.

But that's not all. The visual editor is also getting new features. It now supports emoji characters, and it is now also easier to add inline images to email. Microsoft says that it has also enhanced the single-line view in the editor to improve the reading experience and has also added a new button in Calendar to make it easier to create a new meeting request.

The new version of Outlook is already live for Office 365 users, provided they are subscribed to Exchange Online plan and have signed up for Microsoft's First Release program. Other users will be able to see the new features and fresh paint in the first week of September.