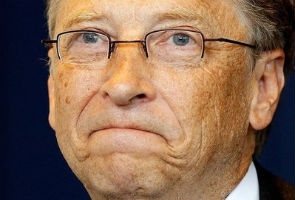 Painting a unfavorable view of Gates and his rise to the pinnacle of global business, Allen details Gates' 1982 scheme "to rip me off," just as Microsoft was becoming a computing powerhouse with its MS-DOS operating system.

In an excerpt from his new memoir "Idea Man", published Wednesday by Vanity Fair magazine, Allen describes Gates, the world's second richest man with a $56 billion fortune, as brilliant but a schemer from early days to control their firm.

The book, Allen's take on the company's early history, confirms the long-reported tensions between the two partners.

In early 1975, after a test on an early Altair microcomputer proved their BASIC program, they decided to form a partnership: Micro-Soft.

Allen said he had always assumed a 50-50 split.

"But Bill had another idea," he wrote: A 60 percent share for himself, claiming he had done more of the programming.

Allen reluctantly agreed, but a short time later, after they had licensed BASIC to NCR Corp for $175,000, Gates demanded a 64 percent stake.

Much later, Allen said, he mused over how Gates reached the 64 percent share.

"I tried to put myself in his shoes and reconstruct his thinking, and I concluded that it was just this simple: What's the most I can get? I think Bill knew that I would balk at a two-to-one split, and that 64 percent was as far as he could go."

"I'd been taught that a deal was a deal and your word was your bond. Bill was more flexible; he felt free to renegotiate agreements until they were signed and sealed."

In 1980 the rapidly growing company hired Steve Ballmer as manager of what was now Microsoft. Ballmer would become chief executive in 2000.

Two years later Allen came down with Hodgkin's lymphoma, one of the more curable types of cancer. While taking radiation treatment, he clashed with Gates over a key business decision, and began mulling his exit from the company.

That December, he overheard Gates and Ballmer discussing his illness, and "how they might dilute my Microsoft equity by issuing options to themselves and other shareholders."

"I burst in on them and shouted, 'This is unbelievable! It shows your true character, once and for all.'" he recalled. "I was speaking to both of them, but staring straight at Bill."

"I helped start the company and was still an active member of management, though limited by my illness, and now my partner and my colleague were scheming to rip me off. It was mercenary opportunism, plain and simple."

Despite Gates' six-page written apology that stressed their partnership's success, Allen said he was determined to leave.

Gates then made one last effort: he tried to buy out Allen at a "low-ball offer" of $5.00 a share. Gates rejected Allen's counter of $10, and, in hindsight, Allen had no regrets.

By holding on to his Microsoft shares as Gates ran the company, Allen now ranks 57th on the Forbes global billionaires list, with a cozy $13 billion in the bank.
Comments