Leader of foundation behind Wikipedia to step down 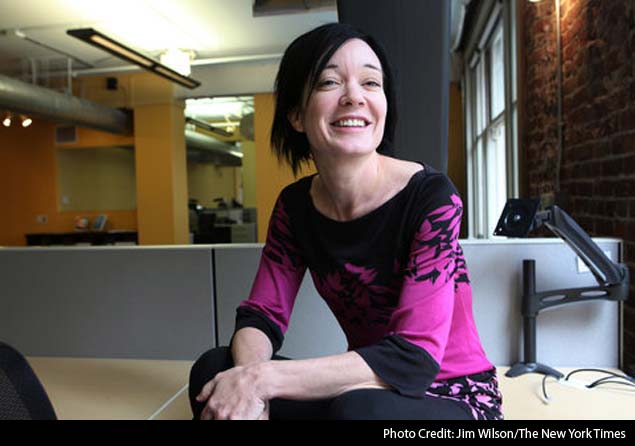 Sue Gardner, who oversaw a period of rapid growth and evolution of Wikipedia, the free encyclopedia, said she would step down as executive director of the nonprofit foundation that runs it.

In an interview on Wednesday, Ms. Gardner, 45, said she would leave in roughly six months, after the Wikimedia Foundation board had picked a successor.

She said she wanted to advocate more directly on behalf of an open Internet, by starting a nonprofit group, writing a book or joining an advocacy organization.

"Wikipedia will be fine," she said. "It's a behemoth, and people love it."

But, she added, "I worry about the broader conditions of a free and open Internet and the future of other Wikipedia-like projects."

Ms. Gardner took over the nonprofit foundation that oversees Wikipedia in 2007, a time of intense skepticism about the accuracy of the free online encyclopedia that relies entirely on tens of thousands of volunteers to write and edit entries that now appear in 285 languages.

Ms. Gardner worked to establish relationships with librarians, scholars and grant-making institutions. "At that time people didn't know what to make of it," she said of Wikipedia. Today, she added, "Wikipedia is widely acknowledged as useful in a way it wasn't five or six years ago."

With credibility came scale. Today, Wikipedia has more than 488 million unique visitors each month, making it the fifth most-visited Web site in the world behind Google, Yahoo, Microsoft and Facebook and ahead of Amazon, Apple and eBay, according to comScore data from January.

In the fiscal year that ended June 30, 2008, the Wikimedia Foundation had total assets of $5.6 million, compared with $49.3 million in total assets in the period from July 1 to Dec. 31, 2012, according to its financial statements.

In 2007 the Wikimedia Foundation, then based in a shopping center in St. Petersburg, Fla., had fewer than 10 employees and raised less than $3 million annually.

Ms. Gardner said the "turning point" for her decision to leave Wikimedia came early last year when she oversaw a blackout of Wikipedia to protest two antipiracy bills under consideration in Washington - the Stop Online Piracy Act and the Protect Intellectual Property Act.

The protests "started me thinking about the shape the Internet was taking and what role I could play in that," she said.

She also said it was important to leave before Wikimedia suffered from a "founder's trap," when a group is too dependent on one personality. When she took over, Wikipedia was still tethered to its co-founder, Jimmy Wales, who started it in 2001. "It's important not to let any organization be overly defined by any single person," she said. "That's particularly the case in the Wikipedia movement because it's a collaborative movement."

Mr. Wales, a member of the Wikimedia board, said in an e-mail that Ms. Gardner had taken over "at a pivotal time in our movement's history" and "helped our community build a long and healthy future for Wikipedia."

Apple's Siri in China trouble after 'copying' claims
Twitter revenue could near 1 billion dollars by 2014: Report