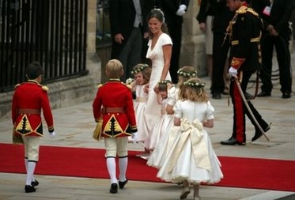 Highlights
It may have been Kate Middleton's big day -- but her sister and maid of honour Pippa turned almost as many heads on Friday attracting a flood of praise on the Internet.

As soon as she stepped out of a Rolls-Royce for the royal wedding at Westminster Abbey wearing a figure-hugging white dress with a plunging neckline, web surfers rushed to heap compliments on the 27-year-old.

Some even thought she outshone Kate at her wedding to Prince William, which was watched by an estimated two billion TV viewers around the world and drew at least one million well-wishers onto the streets of London.

Pippa's dress was ivory and white satin, similar in detail to her 29-year-old sister's wedding gown.

The two sisters' dresses were created by Sarah Burton at Alexander McQueen and both outfits were praised by fashion experts and the public alike.

Pippa, who shares a flat with her brother in the upmarket London district of Chelsea, works for her parents' party goods business, Party Pieces.