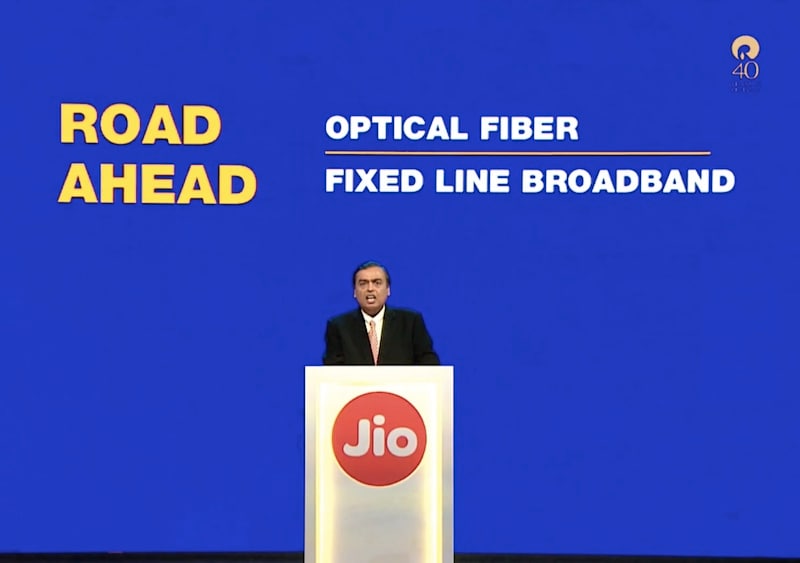 In ten months of its existence, Reliance Jio has launched a 4G-only telecom service, a low-cost feature phone, and a bouquet of content services. But the subsidiary of India's largest industrial house Reliance Industries Limited isn't done yet. The company is working to launch optical-fiber-based JioFiber high-speed broadband, and a fixed line broadband service, RIL's chairman and managing director Mukesh Ambani confirmed at the company's annual general meeting, where it also unveiled the Jio Phone.

Ambani said on Friday that Reliance is creating its fixed-line high-speed broadband network, which it sees as the next leap forward for the country. Without sharing any firm timeline, Reliance Jio said it is "well on track" to bring its optic-fiber connectivity to enterprises, small businesses, homes, and public spaces.

The company has been testing its broadband services in several parts of India, which suggests that a nation-wide roll-out can't be that far out in the future. In fact, earlier this month, the company accidentally revealed different plans for the JioFiber service on its website.

According to the listing, and brochures its representatives have distributed in select home complexes, the company intends to offer 100Mbps connection with a 100GB data cap (with 1Mbps from there onwards) for free to customers for a period of three months.

The arrival of Reliance Jio's services could improve the poor penetration of broadband services in India, which according to estimates from TRAI stand at 7 percent. "It is a matter of concern," TRAI chairperson RS Sharma said late last year.