Amazon India Introducing Electric Delivery Rickshaws, Pledges to Have 10,000 EVs on Road by 2025

Amazon CEO Jeff Bezos made the announcement via a tweet Monday, and he can be seen driving one of the Amazon India electric rickshaws in an accompanying video. 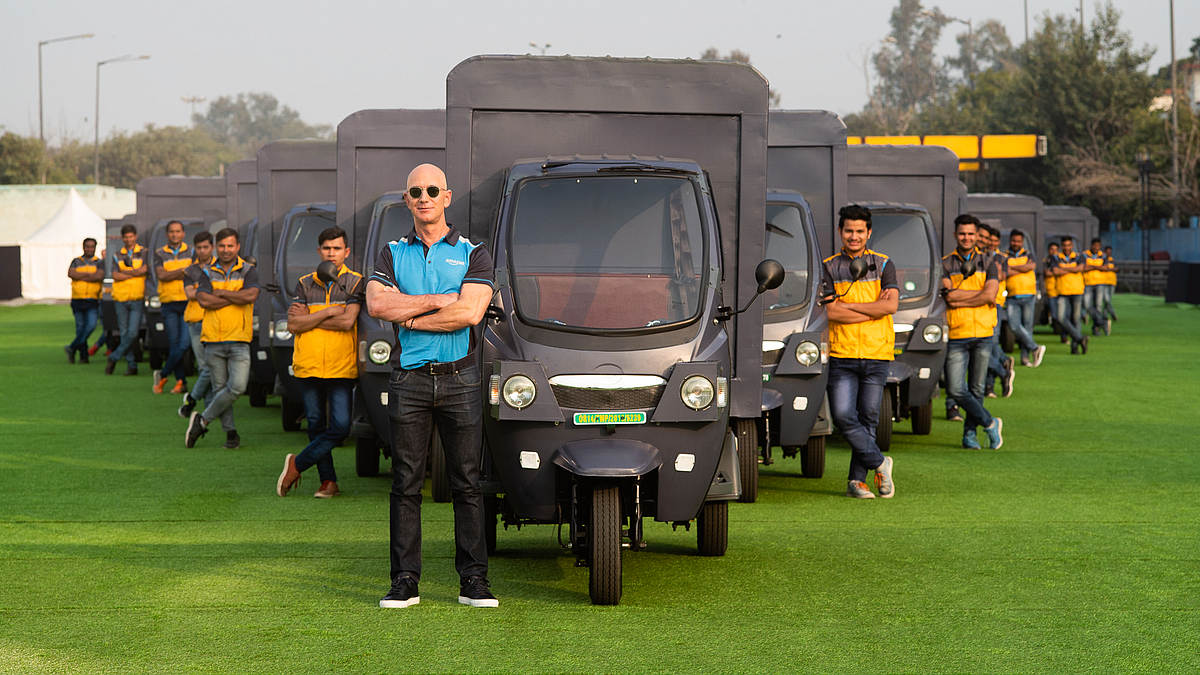 Amazon India on Monday announced that it has started rolling out its electric vehicle delivery fleet in the country, with the goal to have 10,000 such vehicles on the roads by 2025. The move comes as part of the company's global Climate Pledge, as announced in September last year. The overall pledge seeks to have 100,000 electric delivery vehicles in operation by 2030 around the world, and thus the move in India is one of the first steps towards achieving that goal. Amazon however says the India vehicles are in addition to those announced for its global pledge.

Getting back to the India initiative, Amazon CEO Jeff Bezos early Monday morning announced via a tweet that the company has started to roll out its fleet of electric delivery rickshaws. He added, “Fully electric. Zero carbon. #ClimatePledge.” The tweet also contains a video of Bezos riding one of the electric rickshaws.

In a press statement, the company also revealed that the 10,000 electric vehicles it will have on the road by 2025 will include both three-wheelers and four-wheelers. This year itself, Amazon India will operate its electric vehicle delivery fleet in in over 20 cities in the country, including major cities like Ahmedabad, Bengaluru, Coimbatore, Delhi NCR, Hyderabad, Nagpur, and Pune, the company said in a press statement. The 10,000 vehicles have been designed and manufactured by OEMs in India, the company added.

The India rollout of electric delivery vehicles comes after successful pilots in different cities in 2019, the company revealed. “Amazon India has been working with several Indian OEMs to build a fleet of vehicles that ensure sustainable and safe deliveries of customer orders. Significant progress in the Indian e-mobility industry in the last few years has led to advanced technology, and superior motor and battery components. In addition, the government's focus to encourage the adoption of electric vehicles in the country, and steps towards setting up of charging infrastructure with the FAME 2 policy has helped the company accelerate and chart its vision for EVs in India,” the company said in its press statement.

Commenting on the rollout, Akhil Saxena, Vice President, Customer Fulfillment - APAC & Emerging Markets, Amazon, was quoted to say, “At Amazon India, we are committed to building a supply chain that will minimize the environmental impact of our operations. The expansion of our Electric Vehicle fleet to 10,000 vehicles by 2025 is an integral milestone in our journey to become an energy efficient leader in the industry. We will continue to invest in the electrification of our delivery fleet, thereby reducing our dependence on non-renewable resources.”