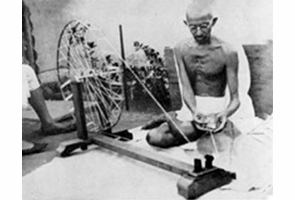 Mahatma Gandhi's philosophies could act as a powerful tool to help create a new just and peaceful world in the age of the Internet, according to author Sudheendra Kulkarni who elaborates the thought in his new book Kulkarni has tried to wed Gandhi's philosophies with the power of the worldwide web and dared readers to strive via the Internet for development of life as a whole in his book "Music of the Spinning Wheel: Mahatma Gandhi's Manifesto for the Internet Age".

Kulkarni says he has been inspired by the life of Mahatma Gandhi and the simultaneous study of the Internet has led the author to coin the term "Internet Satyagrahis" in the book brought out by Amaryllis publications.

"It is a call to all those readers, who believe even to some extent in the power of the Internet on the one hand and also in the philosophy of Mahatma Gandhi, to become Internet Satyagrahis," Kulkarni told in an interview.

"The Spinning Wheel (charkha) of Mahatma was not merely just a tool but life transformative machine to propagate ideas and ideals - namely non-violence, justice, respect for nature, equitable and sustainable socio-economic development - and my study of the Internet has made me realise that it has united the world into a single community living in a Global Village," says Kulkarni.

The author says "Satyagraha," "Swaraj" and "Swadeshi"- the three pillars of Gandhian philosophy if superimposed on the Internet can benefit the earth in entirety and also keep perils at bay.

Terming the World Wide Web as a Weapon of Mass Construction, Sudheendra Kulkarani says the Internet has vastly increased the world's creative resources and creative power, something that the Mahatma had wished for creating a Global Village.

"I strongly believe that, thanks to the power of Internet, Globalisation is being transformed into Glocalisation - that is a proper balance between the global and the local," heads.

He points out "the ethical values cherished by the Mahatma" can defeat various "devious designs."

With various social media applications such as Facebook and Twitter taking over the "real world," Kulkarni writes about the importance of physical interactions between human beings.

"Gandhi would have certainly cautioned people against it because it reduces netizens' real social contact. People need real social interactions to both experience and enjoy life. These interactions are needed also for individuals to perform their indispensable duties toward communities and societies," he writes.

The author also seeks to dispel the notion that Gandhi was anti-technology and points out that the Bapu endorsed any new development and technology that was beneficial to humankind and that had its morals and ethics in place.

"Science and Spirituality were two sides of the same coin for him. The Mahatma was a romantic scientist," says Kulkarni.