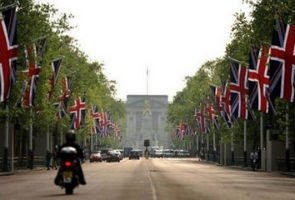 Highlights
The first British royal wedding of the Internet age is generating one mention every 10 seconds online and will be streamed live to an estimated audience of several hundred million viewers.

Internet users can even sign a virtual book of congratulations for Friday's marriage of Prince William and Kate Middleton.

On the website The Internet Forum alone, there have been almost 113,000 posts on the subject of the wedding.

At least 9,000 comments a day are being posted online generally, according to Internet research firm Greenlight, with a 700 percent surge in interest since March, and "fans" of the wedding outweigh opponents by a ratio of six to one.

But Alicia Levy, one of Greenlight's founders, said it was striking that while times change, some time-honoured traditions remain the same.

"When you think back 30 years, it is interesting to see the similarities between Prince Charles and Diana's wedding when it comes to some of the points of conversation and curiosity to consumers, the wedding dress and designer for one," she said.

"However, the Internet -- from online news sites to social media -- mean that by comparison, this wedding truly is a very public affair."

When Charles and Diana tied the knot in 1981, the Internet was in its infancy, even if Queen Elizabeth II had become the first monarch to send an email five years earlier on a visit to a British military research centre.

Indeed, William and Kate's engagement was first announced on microblogging site Twitter in November, although it was accompanied by an old-fashioned press release.

And palace officials have said the wedding will be streamed live on YouTube, the first such coverage of a royal event.

As well as the four hours of Internet coverage on the Royal Channel (www.youtube.com/theroyalchannel) on Friday, there will also be a live multimedia blog put together by royal officials.

St James's Palace, the office of Prince William, said it was "in line with the couple?s wishes to make the wedding as accessible as possible for as many people as want to participate".

It is not known though what the prince thinks of the Twitter feed @William_HRH, a gentle spoof of the second-in-line to the throne.

One post on Monday read: "Frantically trying to put names to faces, have not a clue who half these 'guests' are."
Comments