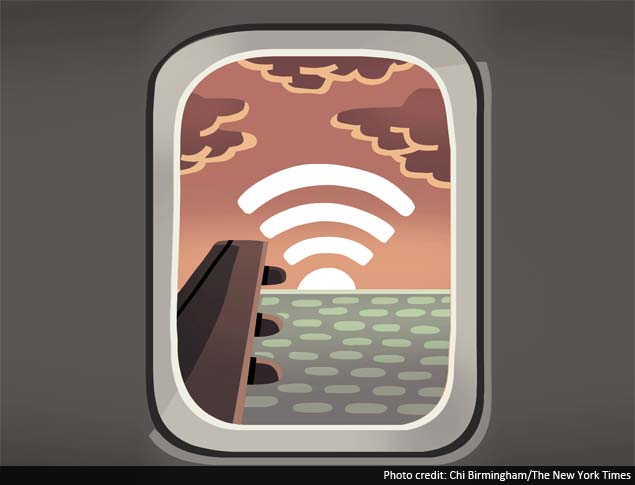 After many years of halting starts and hundreds of millions of dollars in investment, in-flight Wi-Fi is finally coming into its own, with 8,700 domestic flights, 38 percent of the total, now offering Internet connectivity, according to a report by Routehappy.com, a website that ranks tens of thousands of daily flights by quality of comfort and amenities.

It remains to be seen, however, how viable in-flight Wi-Fi will be as a business - though Gogo, which leads the field with systems on more than 80 percent of all Wi-Fi-enabled flights in North America, had an initial public offering on Friday. Gogo, which has its air-to-ground-based system in more than 1,900 airplanes flying domestically, plans to use proceeds of the stock offering partly to finance a planned international rollout using Ku-band satellite technology, which allows the service to work over oceans. That will enable the company to sell its services on overseas flights.

With competitors like Panasonic Avionics, Row 44, ViaSat and OnAir active in the field, market share will be fiercely contested. And the Gogo offering went off against the sobering reality that, so far, only a small number of passengers have been choosing to pay for Wi-Fi, which can cost $12 or more per session. Gogo, for example, said that in the first quarter of this year, 6.2 percent of passengers on planes with its Wi-Fi systems opted for its service, a slight improvement from the 5.6 percent who took it in the 2012 first quarter.

Still, not all supporters measure the fledgling in-flight Wi-Fi business by an admittedly sluggish current rate of use, known as take rate. With a rapidly growing number of passengers carrying Wi-Fi-enabled smartphones and tablets, and with signals coming from the Federal Aviation Administration that restrictions may be eased on the use of such devices during taxiing, takeoff and landing, airlines that fail to offer in-flight connectivity will most likely be at a competitive disadvantage, said Mary Kirby, the editor in chief of Airline Passenger Experience, a magazine and website.

"In-flight connectivity has become a cost of doing business for airlines," Kirby said.

"The take rate is no longer a useful measurement," added John Walton, the director of data for Routehappy. "What matters is the idea that you can get online when you want to get online."

According to the Routehappy report, which is based on current data from domestic and international commercial flights, the 38 percent of daily domestic flights that have Wi-Fi service cover nearly half of all actual flight time, because planes used on longer flights are more likely to be equipped with the service.

In the United States, Delta Air Lines, which uses the Gogo air-to-ground system, is the leader in providing Wi-Fi on domestic flights, although Southwest Airlines - which uses a satellite-based system provided by Row 44, is "catching up fast," the report says. Overall, about 80 percent of nonstop flights between California and New York are connected.

Staying connected on a long flight typically raises concerns about "battery anxiety," the report says. American Airlines is the leader in providing power outlets for passengers on 515 of its total 541 Wi-Fi-equipped flights. Delta is a close second.

As Wi-Fi services roll out on increasingly sophisticated technology, airlines see revenue-generating opportunities beyond selling the basic connection. For example, in-flight entertainment offerings can be sold through onboard systems that stream content to passengers' own electronic devices. Southwest Airlines started selling movies on demand for $5 on its Wi-Fi-equipped flights early this year.

"That sort of service is rolling out somewhat, but not completely, in concert with in-flight Wi-Fi," Walton said.

Gogo also offers a pay-per-view movie service called Gogo Vision on more than 650 airplanes and said it planned to add that service to an additional 900 planes by the end of this year.

Unable to raise fares much in a competitive environment, "airlines are looking for new revenue streams and ways to attract passengers by enhancing the in-cabin experience" with fee-based services, Gogo says.

Increasingly, supporters of the industry say, business travelers in particular search sites like Routehappy.com to determine which flights have Wi-Fi connections and extras like power ports.

For providers, the potential market is huge, even if the competition is intensifying around the world. Globally, only about 12 percent of all commercial aircraft are now Wi-Fi-enabled, Gogo says. In a regulatory filing, Gogo says that the "proliferation of mobile devices" has led travelers, "and business professionals in particular, to expect connectivity wherever they may be."