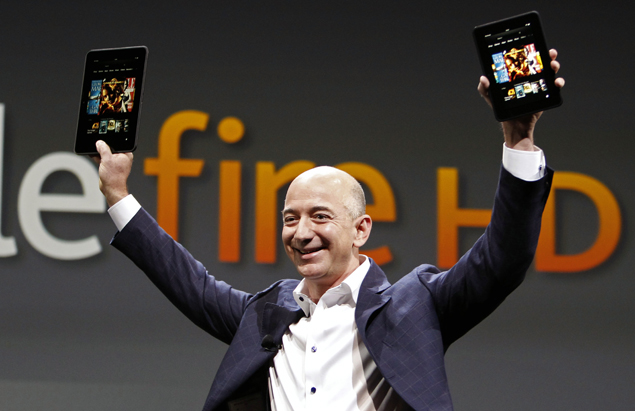 Technology and media circles are abuzz at how e-commerce wunderkind Jeff Bezos plans to modernize The Washington Post, a money-losing bastion of the old economy.

Among the top predictions the man who transformed retailing will want to wean the venerable paper off its print edition; expand the Post's real-time content for a Twitter generation; share Amazon's near-unparalleled data on online buyers; and devise novel avenues to sell anything from books to smartphones to the Post's half a million readers.

The founder and CEO of Amazon.com Inc hasn't given much away since he struck a deal to buy the 135-year-old paper for $250 million. But he did tell employees on Monday that they will have to "invent" and "experiment" as the Internet revolutionizes the news business.

Although Bezos, not Amazon, is buying the Post, it is widely expected that he will in some way 'Amazon-ify' the news business, bringing across strategies imprinted on the company he founded in a garage 19 years ago.

One thing is clear: the famed innovator is bringing enormous street cred to bear on a problem that has baffled newspaper owners for over a decade: how to reverse the ebb of advertisers to other media.

"Amazon realized information travels much faster as a digital object rather than a physical object, and now Amazon is a world leader in e-books," said Aaron Levie, co-founder and CEO of Box, a popular online content sharing platform. "The analogy holds true for newspapers. Bezos knows that transformation incredibly well and he can help them navigate that transition."

The first casualty of this shift will likely be newspapers themselves. Bezos remarked to a German paper last year that printed news would largely disappear in 20 years.

Readers can already get the Post on Amazon's Kindle - as well as on Apple Inc's iPad and other devices powered by Google Inc but a closer tie-up seems likely.

One idea would be for the Post to offer news via a branded tablet, perhaps given away with a one-year subscription, much as phone companies subsidize handsets, said Thomas Russo, a partner of the Gardner Russo & Gardner investment firm, one of the biggest Washington Post Co shareholders. Amazon for a long time sold its Kindle e-readers at cost, effectively giving away a device through which buyers then access its online trove.

"With technology being what it is, that would not be financially crippling," said Russo, adding that by moving readers off expensive printed papers, "You would have re-oriented your cost structure."

Amazon focus
Perhaps Amazon's greatest strength is its knowledge of customers built up through their buying history, which makes the company a very efficient marketer. That technology applied to the Post could make its advertising business much more valuable.

"Nobody knows more about Internet media distribution than Jeff Bezos," said Richard Brandt, author of 'One Click: Jeff Bezos and the Rise of Amazon.com.' "If anyone can figure out how to do this profitably, it is he. That will benefit the Post and, possibly, all media organizations."

Bezos wrote in a letter to Post employees that he did not intend to get involved in day-to-day management of the paper, and would leave news production to the existing leadership team. But he did hint at a shift to a more local, personalized idea of news, which echoes Amazon's approach to customers.

"Our touchstone will be readers, understanding what they care about - government, local leaders, restaurant openings, scout troops, businesses, charities, governors, sports - and working backwards from there," wrote Bezos.

His purchase of the Post could be viewed as an extension of Amazon's move towards content creation, most recently creating its own movies and TV series, which gives the company a new way of engaging with customers.

"'News' is the digital equivalent of a high-traffic intersection: as people pass through to figure out what's happening they might also stop to do some shopping," wrote Henry Blodget, founder and CEO of news site Business Insider, which Bezos has also invested in. "Content and commerce companies have long dabbled with combining the two experiences, but no one has really nailed it."

Bezos has time to work out a formula. He has shown at Amazon that he is willing to work on ideas for years before they become profitable. And by making the purchase personal, he has removed demanding shareholders from the equation.

The Post is already one of the more prominent print publications on the web. The Washington Post Co's online publishing activities, primarily washingtonpost.com and Slate, took in $29.8 million in revenue for the second quarter of 2013, up 15 percent from a year ago. Slate is not included in the sale to Bezos.

That is just over 20 percent of The Washington Post Co's overall newspaper publishing revenue, but is in line with other large papers. The company earned much greater revenue from its education and cable TV operations.

"The Washington Post has already been one of the most forward-thinking newsrooms," said Box's Levie, citing its WaPo Labs project, a team that experiments with new ways of providing news from a 'Social Reader' Facebook app to the Trove personalized news gatherer, which pulls from 10,000 sources. WaPo Labs is also not included in the sale.

"They have already been fairly tech-savvy," said Levie. "It's a business that has to transform itself from print to digital and they've done a pretty good job doing so. The benefit of having an owner like Jeff Bezos is you'll be able to continue to fund those experiments."