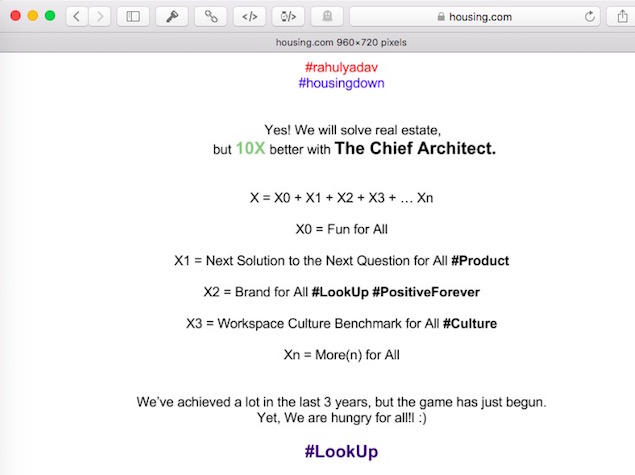 Housing.com appears to be have been hijacked or hacked and the home page has been replaced with a cryptic message. Visitors to the real estate website are seeing the following message:

Yes! We will solve real estate, but 10X better with The Chief Architect.

We've achieved a lot in the last 3 years, but the game has just begun.
Yet, We are hungry for all!l :-)

No group or individual has so far claimed responsibility for the act.

Update: The website seems to be operating normally now. We've reached out to the company for a statement on what happened and we will update the story as and when we hear something.

Housing.com last week parted ways with CEO Rahul Yadav. Yadav later took to Facebook to deny any involvement with Monday's incident, saying, "I would have DESIGNED it better. ‪#‎NotInvolved‬ ‪#‎LoveYouTechTeam‬"

Yadav was was no stranger to controversy as CEO of Housing.com having first hit the headlines when the news of his dramatic resignation broke on social media. "I don't think you guys are intellectually capable enough to have any sensible discussion anymore," Yadav had written to the Housing.com board in his resignation email, only to apologise to the board members and withdraw his resignation.

A few days later Housing.com issued a statement saying he was giving away all his shares to Housing.com employees. Yadav has also courted controversy by criticising other companies and CEOs in the Indian tech space, including a feud on social media with Zomato CEO Deepinder Goyal.

(Also see: 'Quitting Was a Well Calculated Tactical Move,' and Other Things We Learnt From Housing.com CEO Rahul Yadav's AMA)