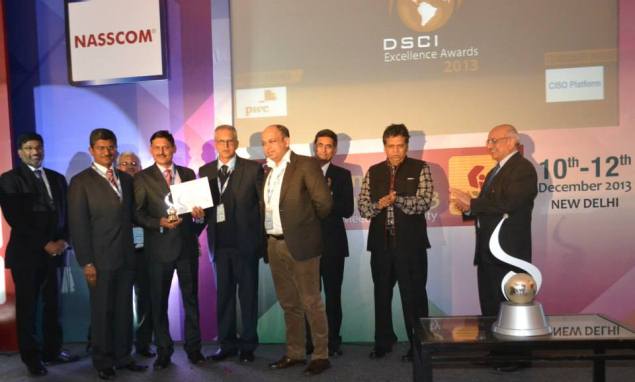 Inspector Suresh Kumar, chief of the cyber cell of Gurgaon in Haryana, won the "India Cyber Cop of the Year 2013" award at a function in the national capital, police said Thursday.

Data Security Council of India (DSCI), a not-for-profit organisation set up by NASSCOM, in keeping with the objective of raising the level of security and privacy of IT and BPO service providers, started giving out "DSCI Excellence Awards" in 2011, in mainly two categories, corporate segment and law enforcement.

This year, DSCI received 65 nominations in the corporate segment and 14 in the law enforcement agency segment.

The "Cyber Cop of the Year" for the law enforcement segment has been added to recognise and honour a police officer who has done the most outstanding investigation in solving a cyber crime case.

This was the first time that Haryana Police was participating in this award process.

The winning nomination was made for a case solved by the Sadar police station of Gurgaon.

It was a unique case of cheating through net banking and the investigation was conducted by officers of the Cyber Crime Cell, Gurgaon.

Despite having no clue about the perpetrators in the beginning, the investigation was conducted with professional skill and the chargesheet was filed two months after the case was registered, after nabbing the accused.

Amit Sabharwal, 34, who holds a Master of Business Administration (MBA) degree and has been a top scorer from Delhi University, residing in Sector 11 of Delhi's Rohini, was arrested June 29 for net banking fraud and sent to jail July 4.

Sabharwal's accomplice Vijay Sahni alias Vijay Chugh, also from Delhi, was arrested May 30, 2013 for illegally withdrawing Rs.1 lakh from an account through net-banking

Sugato Debgupta, a resident of Malibu town in Gurgaon, had complained that someone withdrew Rs.1 lakh from his account at HDFC bank through net banking.

After having received a message that Haryana Police was among three finalists in the "India Cyber Cop of the Year" award along with Karnataka and Kolkata Police, Commissioner of Police Alok Mittal of Gurgaon and Joint Commissioner of Police (Crime) Vivek Sharma, both of whom directly supervise the Cyber Crime Cell, attended the award function at a hotel in New Delhi on December 11, along with the Cyber Crime Team led by Inspector Suresh Kumar.