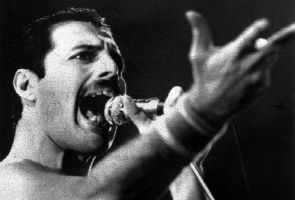 Highlights
Freddie Mercury would have been 65 today. His birthday present from Google - a minute and a half long animation that shows the late lead singer of Queen in a world inspired by lyrics from his best known songs.

The animation plays to the tune of Queen hit song Don't Stop Me Now and the graphics contain references to other famous numbers including Crazy Little Thing Called Love and Flash.

This is Google's second longest Doodle so far, after the 2 minute tribute to Charlie Chaplin. Previously, interactive Google Doodles have honoured musicians such as former Beatle John Lennon and guitar hero Les Paul.

Freddie Mercury, born Farrokh Bulsara, was Parsi by birth and remains a giant in the world of rock 20 years after his death from AIDS related complications in 1991.