Google's good side highlighted in 'The Internship' movie 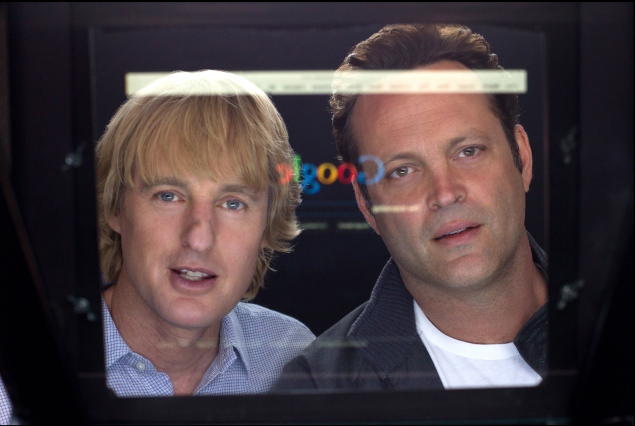 The new comedy depicts Google as corporate America's equivalent of the Emerald City from "The Wizard of Oz" - a colorful place where all the food is free, interesting people and gadgets loom around every corner and dreams can come true for those who think big enough, work hard enough and collaborate as a team to make it happen.

It's a nearly two-hour showcase for Google's idealistic culture and for a product line that's becoming deeply ingrained in people's technology-dependent lives.

"The Internship," which hits theaters Friday, will likely be a hit among Google-loving geeks and fans of feel-good flicks, especially those with an affinity for the riffing and mirthful chemistry between Vaughn and Wilson. The two are back together for the first time since "Wedding Crashers" came out in 2005.

But the film may not create such warm and fuzzy feelings among Google critics who view the company as a self-interested bully that tramples over copyrights, intrudes into people's privacy and stifles competition by abusing its power as the Internet's main gateway.

All of these concerns have been the focal points of high-profile regulatory investigations and lawsuits. Yet none of that is raised in the movie, which revolves around a couple of 40-something-old guys who become clueless interns at Google after losing their jobs selling a product - wristwatches - supplanted by innovation.

Everyone enamored with Google after seeing the movie should keep one thing in mind.

"This is not a documentary on Google where you come in and say this is exactly the way things are done there,'" Vaughn told an audience of real-life Google interns and technology reporters after a screening of "The Internship" in San Francisco.

The biggest misnomer about the movie revolves around Google's summer internship program. As the movie portrays, Google does indeed select about 1,500 elite college students from around the world to participate, but the film conjures an imaginary curriculum for the sake of entertainment.

In the film, the interns are separated into teams that compete in different disciplines to win the ultimate prize: full-time jobs at Google. At one point, the teams even engage in a game of Quidditch, the mythical sport that aspiring wizards in "Harry Potter" play to prove their prowess. None of this is actually part of Google's real-life program, according to the company.

Another scene suggests that Google puts a premium on training employees to work a customer help line - a concept that will seem incredulous to anyone who has ever had a problem with a Google service and tried to reach a human being on the telephone. Like many other Silicon Valley companies, Google directs people to look through its own online help articles or ask other users on message boards.

Amid the fictional hijinks, the movie casts a spotlight on Google's ever-growing stable of products beyond Internet search, including YouTube, Gmail, Maps, Chrome Web browser and language translation. Google's driverless cars get a cameo, but its wearable computing device, Google Glass, doesn't appear. Device connoisseurs will notice characters using a phone made by Google-owned Motorola Mobility and devices with Google's Nexus brand. The free advertising came without Google contributing to the film's nearly $60 million budget.

Some of Google's rivals also get screen time. There are glimpses of Apple's iPhone and iPad during the film. Facebook's photo-sharing service Instagram gets a shoutout. Location-sharing service Foursquare gets a passing mention, although not in a flattering way. A character describes Foursquare's tracking ability as creepy, a description often slapped on Google services that monitor people's whereabouts and preferences.

Although the movie does have some good-natured fun at the expense of the intelligent oddballs working at Google, it mostly focuses on the positive side of a company whose motto is "don't be evil."

Likening Google to an Oz-like oasis isn't totally farfetched. The company's headquarters in Mountain View, Calif., does sometimes seem like a fantasyland - a cross between a surreal think tank and a college campus sheltered from the worries and hardship of the world around it.

To make Google seem even more mystical, the movie's director, Shawn Levy, said he filmed the first 15 minutes or so of the movie in dull, bland colors. That way, the bright reds, yellows and greens splattered across the company's headquarters seem even more vibrant.

In some instances, it's not really Google's headquarters. Much of the movie was filmed at Georgia Tech and other parts of the Atlanta area.

Other Silicon Valley companies, most notably Facebook and Apple, have created their own versions of Shangri-La, but Google's allure stood out to Vaughn in 2011 when he first began mulling his idea for "The Internship."

"Google was the company that seemed the most interesting to me," Vaughn said. "It was the right complement to this story."

One of the movie's producers, Sandra J. Smith, used to work in the tech industry and tapped into some of those connections to set up the early meetings with Google. The company agreed to help out with the movie, without any veto power over the script, after Levy promised Google officials the movie wouldn't be cynical or mean-spirited.

"In retrospect, the amount of creative autonomy that they handed over to me was excellent, but also it could have really bitten them," Levy said during an interview with The Associated Press at Google's headquarters. "It turned out in a way that we're all happy."

Google's cooperation stands in contrast to Facebook's refusal to participate in the making of "The Social Network," a 2010 film that drew a darker portrait of its founder, Mark Zuckerberg. In that instance, Facebook stressed the movie wasn't anything like what really happened within the company.

"The Internship" doesn't directly mention Google's co-founders, Larry Page and Sergey Brin, though Brin makes two short appearances playing himself. Brin is seen happily cruising around the Google grounds when the characters played by Vaughn and Wilson arrive to start their internship. Brin also appears near the end of the movie to congratulate the interns.

The first appearance wasn't even in the script, according to Levy. The director said he simply saw a bearded guy riding around Google's headquarters on an elliptical bicycle while wearing clothing better suited for yoga. When someone told Levy who that person was, he asked Brin if he could film him. Brin obliged.

Page, who is Google's CEO and is less outgoing than Brin, doesn't appear in the movie, though he wanted to see it made in hope that it will get more young people interested in pursuing careers in technology.

"The reason we got involved in that is because computer science has a marketing problem," Page said last month during an appearance at a Google conference for programmers in San Francisco. "We are the nerdy curmudgeons."

Page believes the movie's coolest character is a headphone-wearing, mostly silent engineer who ends up playing a key role in the climactic scene. "We are really excited about that," he said.

Although he said he didn't set out to make an ode to Google, Levy leaves little doubt about his admiration for the company.

"I realized what they're about is really a certain quality of personhood that yes, has to do with intelligence, but has as much to do with ethical soundness and compassion and a sense of trying to do more good than harm in this world," Levy told the AP.

While meeting with Google's real-life interns, Levy also hailed a company ethos that has become known as "Googleyness." When asked at the Google screening how he defines that term, Levy said: "It's all the things that make you a complete person beyond being smart."
Comments

IBM to acquire SoftLayer for $2 billion
HTC Desire U available online for Rs. 13,499